When I was in fourth grade, my winter break was extended by three days thanks to a snowstorm — great news made even better by the fact it meant I got to play the Nintendo 64 my brothers and I received for Christmas a few more days without interruption. I was more than excited to spend additional time in the Mushroom Kingdom with Mario in Super Mario 64.

Fast-forward to today, I'm now a grown adult and find myself seeking out the comfort video games have always provided. I didn't see "pandemic" on my 2020 vision board, but that's what we're currently living in. So, instead of being stuck at home because of adverse weather, I'm stuck at home practicing social distancing in hopes of limiting exposure to COVID-19 to myself, loved ones, and complete strangers I've never met. It's one hell of a plot twist in this disaster movie I very much want to exit.

And in these extreme times, I turn to my reliable fave, Mario. 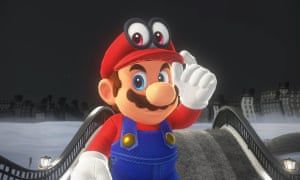 It's a new gaming system, same old Mario, which means the same old shenanigans. Some things will always be true: the sun will rise in the east and set in the west, and if Mario can do it, he's going to save Princess Peach. If "Ain’t No Mountain High Enough" song by Marvin Gaye and Tammi Terrell were a video game, it would be Super Mario Odyssey.

Bowser has allegedly kidnapped Princess Peach to marry her in the Bravo TV event of the century. Mario teams up with a sentient hat named Cappy who has a sultry pair of bedroom eyes and allows you astral project — a power I'm sure a lot of us wish we had right now. Once again, you're in the boots of this everyday working Joe with a medical degree who travels by way of sewer lines, breaks the necks of his enemies by jumping on their heads, has a knack for finding money in blocks, and has a strong affinity for mushrooms.

In this game, our patron saint of hateration and holleration in this dancery has his mustache set to ruin Bowser's wedding day plans. Extravagant plans, might I add. Mario is hot on Bowser's pre-wedding world tour. There shan't be any two-step wedding marches to Jagged Edge's "Let's Get Married" on Mario's watch.

I’ve played this game for hours on end and it has yet to lose its appeal. Super Mario Odyssey reminds me a lot of Super Mario 64. The different kingdoms you visit on your journey to stop this wedding are all memorable and unique and spending hours of gameplay in any given kingdom is easy to do. I remember loving Super Mario 64 for that exact reason. My favorite kingdoms, in no particular order, are the Cascade Kingdom, Metro Kingdom, Luncheon Kingdom, and the Wooded Kingdom.

The Metro Kingdom is probably my favorite, all thanks to its city's name (New Donk City), its festival, and, of course, its FASHION. By the way, Mario can change clothes in this game as you collect different pieces of clothing only available to a particular kingdom. In the Metro Kingdom you can find a black pinstripe suit and black fedora and dress Mario up like Rick Blaine in search of his Ilsa Lund. Mayor Pauline and her jazz band are another reason to love the Metro Kingdom, a kingdom deserving of its own separate game.

The variety in the scenery makes Super Mario Odyssey the perfect game for when you're stuck in the house. The worlds are lush and rich in design and just soothing to look at. It's an opportunity to globetrot with none of the actual hassles that come with traveling.

Like the Mario games that came before, you're always just a moment or two from missing Bowser, who just left the kingdoms by the time you arrive, going to each one and stealing valuable items from them for the wedding. Instead of the Koopaling gang, Mario faces off with their bunny rabbit tethered called the Broodals. This has always caused me to experience a Mandela effect because I always think it's the former and not the latter since they're all pretty much the same but just rabbits instead of koopas. The Broodals keep the same energy as the Koopaling kids they're modeled after, each giving you a little razzle-dazzle in during the boss fights with them.

My absolute favorite thing that happens in this game is the ending. The last kingdom you travel to is the Moon Kingdom. Bowser really makes you chase him all over the world and out into space. Without giving too much away, it ends how most Mario games end, but there is a small plot twist that I love for Princess Peach. The game ends like how I wish most romcoms would end.

There is enough drama and intrigue to keep my mind off the world being on fire for a few moments, and hopefully yours if you're thinking of playing Super Mario Odyssey for the first time after reading this. Whether you decide to go through the Koopaling tethereds in a hurry or take your time to explore the kingdoms collecting power stars and outfits, Super Mario Odyssey is a great game to get lost in for a couple of hours and find some comfort during these stressful times.

Hop in, loser: we're going to crash a wedding.

It's a fan thing
Join SYFY Insider to get access to exclusive videos and interviews, breaking news, sweepstakes, and more!
Sign Up for Free
All Posts About
Fangrrls
Games
Gamegrrls
super mario odyssey
Related Stories