Nerds and geeks celebrate their fandom in lots of different ways — cosplay, fanfiction, and more — but slipping into a tunic and taking the stage in a cacophony of geeky songs about the nerd world at large is next-level. That's the way of The Library Bards.

You might recognize the bards, as both are well-known in geeky spheres. Bonnie Gordon starred in The Quest and is on Geek & Sundry in Shield of Tomorrow and Callisto 6. She's also a voice actor, voicing characters in cartoons and video games such as Street Fighter V, Fire Emblem, Mega Man 11, and many more. Xander Jeanneret was a contestant on the second season of TBS' King of the Nerds, and today is also a part of the Geek & Sundry family. You can see him in We're Alive: Frontier, Sagas of Sundry, and L.A. by Night.

Together they're the Library Bards, a nerd parody band running the convention gauntlet. Their trade is taking Top 40 hits such as Taylor Swift's "Shake it Off" or Pat Benetar's "Hit Me With Your Best Shot" and transforming them "...into the nerdy versions they should have been in the first place," as they say.

The two are co-bards, friends, and even roommates. "We met LARPing. Xander was an old wizard, I was a bar wench. Typical origin story," Gordon tells SYFY WIRE. After they were both cast in reality shows, The Quest and King of the Nerds, they began being invited to conventions to talk about their experiences. "We knew the hype of reality shows are short-lived, so we sat down and started to think of a way to continue to work together and guest at cons, but have complete control of the project."

And thus, The Library Bards was formed.

"We decided to start this project together, one that combined our love of fandoms and music," Jeanneret explains.

"We didn't really know what we were doing..." Gordon adds. "We knew we wanted to create nerdy music and parodies. We sat down and wrote a bunch of music and then released a music video right from the start."

It wasn't an instant success. Jeanneret and Gordon were asked to attend conventions primarily for their reality show and voice over credentials, not their parody songwriting. They were, of course, thankful for these opportunities, but they wanted to make The Library Bards a success. If a con wouldn't book The Library Bards outright, at first, they would negotiate a Bards concert in their deal for appearances at panels and signings.

"It was a new idea, and the convention organizers were a little wary," Jeanneret explains. However, once they actually did perform and conventions saw the reaction, all worries flew out the window. "Once we perform, most cons immediately book us for the following year."

Initially, there were only a handful of solo-Library Bards bookings, but now they're regularly booked for upwards of 25 conventions a year, averaging two a month. Their schedule is only getting more packed as well as word spreads and attendees request their attendance. It's been four years since they started and they're so thankful to see how the brand they created together become a flourishing and beloved part of con culture. Not only do they have numerous live performances under their belt, but they recorded a full album as well.

Credit: Bellzebob via The Library Bards

Photo: Bellzebob via The Library Bards

"We have a list of cons we consistently do every year, as well as new cons reaching out to us through the con season. It's a rewarding feeling when we get an inquiry from a new con or event, knowing that they have heard of us from other venues," Gordon says.

How does one come up with a nerdy parody song? And how do you choose which songs to parody in the first place? The process isn't so difficult for these two, and it turns out, it's more or less just like anyone creates a song.

"We have a sort of list of songs that we are fans of, and a list of fandoms we want to write about. We let those lists sort of marinate in our heads until there is a match, and then we go for it," Jeanneret says. Gordon adds that they're both very aware of their vocal ranges and choose songs based on what they can reasonably sing. Also, the horrific traffic in L.A. offers them both plenty of time to listen to the radio and think up ideas and jot down notes.

"Usually, we'll have a writing session where the two of us will pitch ideas back and forth, and we'll eventually finish through a whole song. After that, we'll have the idea pitched to our backing track composers, and we'll work on the live version of it. Once we test out the material and make a few tweaks, we bring it into the studio to record," Jeanneret says.

From there, some songs go on to get their own music videos while others head to the stage at a convention near you. Their fans are enthusiastic and find both hilarity and joy in the songs and performances. Those are the feelings this duo want people to leave with — unabashed enjoyment of something fun, nerdy, and clever. The songs are catchy, but its really the live performances and banter that Jeanneret and Gordon have that seals the deal on what makes The Library Bards so darn entertaining, as well as important.

"We want them to laugh — be happy. We celebrate all nerdy fandoms and basically use Library Bards as a way to share our love for "all things geek" to others," Gordon explains. "The main message of Library Bards is acceptance of all, no matter what gender, fandom, sexual orientation, etc. We are both very big on anti-bullying."

It's a sentiment that anyone can appreciate, and one that resonates with their fans.

Despite having many other projects and commitments, Jeanneret says that being a Library Bard has seeped into all aspects of his everyday life, even his dreams. He recalls a nightmare he had where he and Gordon were performing in his hometown.

"Dream Bonnie told the crowd she was surprising all of us by having us perform 'Barbie Girl' by Aqua. In the dream, I was so mad, as we hadn't prepared or talked about this, and I woke up to yell at real-life Bonnie about it."

"After describing the dream, she suggested we actually do a parody of 'Barbie Girl,'" he explains, and so "Geeky Girl" came to be.

It's just one case of everything nerdy being an inspiration. For those who may be inspired by them or any geeky venture, both Jeanneret and Gordon hope that people continue to create content that's true to them and their interests.

"Don't be afraid. Create. Do something that you're passionate in. The more nerdy content out there the better," Gordon encourages.

"One of the main concerns people have is that they are passionate about something that is "popular," and they fear that their [fan works] will get lost in the shuffle. I like to tell them to make the thing anyway! The fanbase is missing your particular voice, your particular project, and it might lead to further discussion or life-long friends," Jennearet adds. 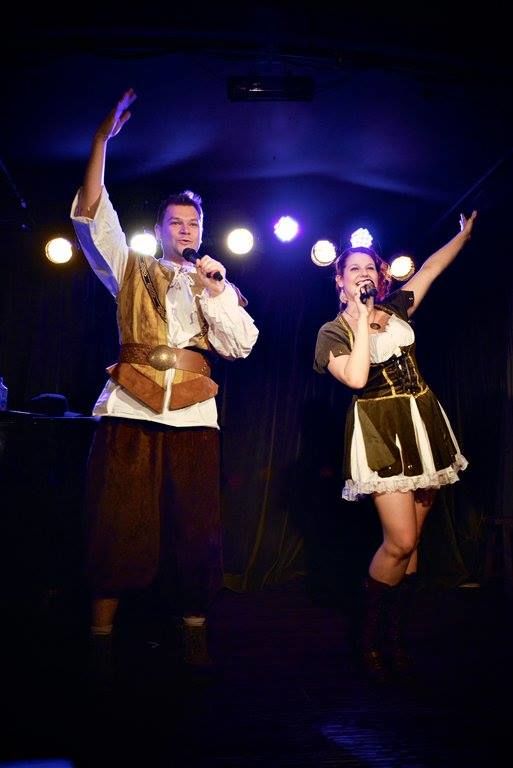 The Library Bards 2019 schedule is out and filled to the brim with great conventions and other adventures like D&D In a Castle in June. They're currently working on their second album in the studio and are even in the early stages of pitching their own television show. For now, however, you can find them on YouTube, Twitter, Facebook, and of course support them on their Patreon.