The Phoenix Saga highlights that Charles Xavier is a terrible boss

While you may not have a co-worker who was reborn by a cosmic entity after sacrificing her life in order to save you, your boss, and the rest of your co-workers, there are still similarities you can find between being a member of the X-Men and the sh*tty day job you want to quit.

The Original Phoenix Saga and Dark Phoenix Saga have some relatable moments and examples of poor mentorship/leadership and the resulting workplace trauma. Poor management by those calling the shots can have a trickle-down effect, leading to a workplace with less than desirable conditions for employees and little to no adequate resources available for employees to seek help.

Charles Xavier might have brought the X-Men together and provided them with room and board, but that doesn't take him out of the running for Horrible Boss of the Year. Xavier shows his entire ass and his bald head throughout both Phoenix Sagas. This is nothing new, but given how traumatic the entire situation was for the team, his actions and words are more jerkish than usual.

The Original Phoenix Saga begins after Jean Grey successfully brings the Starcore space shuttle back to earth by sacrificing herself to one of the worst solar storms in human history. She emerges from the water as the Phoenix, passes out, and is hospitalized. An all-around traumatic set of events for not only Jean but the rest of the X-Men. Granted Charles is just as affected by what happened because he cared for Jean too, to put it mildly.

Jean is all of us right now.

Yes, Charles admitted his love for an underage Jean, so he’s already getting the side eye and phone calls to the proper authorities. He has creepily overstepped boundaries that should be in place when it comes to the mentor-mentee relationship. 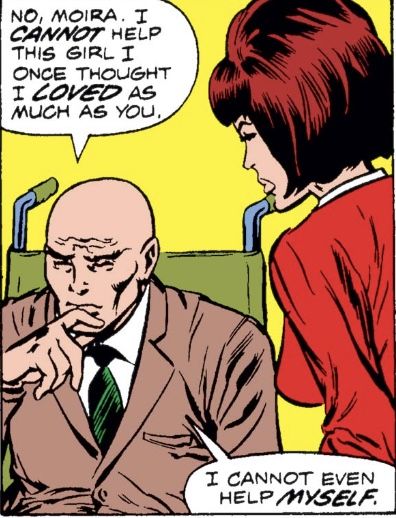 He is supposed to be a mentor to his students and in a supervisory role over the X-Men, making it cringe-worthy when he basically snaps at them when a few voice that they want to stay near Jean while she is in the hospital instead of being forced to go on “vacation.” Xavier sends them away because he can’t look after both the X-Men team and Jean Grey at the same time. Charles calling it an enforced vacation is weird and sounds more like the X-Men are just a nuisance unless they're risking their lives for him and the rest of the universe. What a jackass of a boss. Plus, his snappy tone doesn’t help either.

We get it. He’s snippy because a student he loves almost died, but it’s a really unprofessional look for someone who is much older and should be the voice of reason at the very trying time. The "vacation" ends up going sideways because it was all a ruse set up by Black Tom, who unleashes the Juggernaut. The poor X-Men can’t even enjoy an enforced vacation without incident.

Scott, who was allowed to stay behind with Jean, doesn’t have it any better either. Once Xavier gets word by way of the telepathic tie with Storm that the X-Men are in danger, he gets manipulative and verbally abusive with Scott, even raising his hand at him because Scott would rather stay with Jean. All signs of a terrible superior: throwing in someone’s face everything you’ve done for them like they haven’t been grateful or done things in return to show their gratitude. Xavier might have taken Scott and the rest of the X-Men in, but he oversteps and is completely unprofessional at a time when they need him to keep it together.

There wasn’t much help Scott could provide anyway, and ultimately the onus is on Xavier if he feels like he has a team of students who aren’t properly equipped to hold their own even when Scott isn’t around. Sounds like poor job training.

While Jean is in the hospital and the rest of the X-Men try to deal with the traumatic events that just took place, that same poor training and lack of mental health support provided by Charles Xavier are even more evident. For example, Storm deals with unpacked baggage she had before even becoming an X-Men. She's still reckoning with the trauma of her parents getting killed and the claustrophobia that stems from their demise. It paralyzes her and almost cost her and the X-Men their lives. However, the X-Men survive their encounter with the Juggernaut, but it's a short-lived celebration because they are right back in the thick of things when they have to face Magneto, who has — unbeknownst to our heroes — been locked up in Moira’s mutant research center. 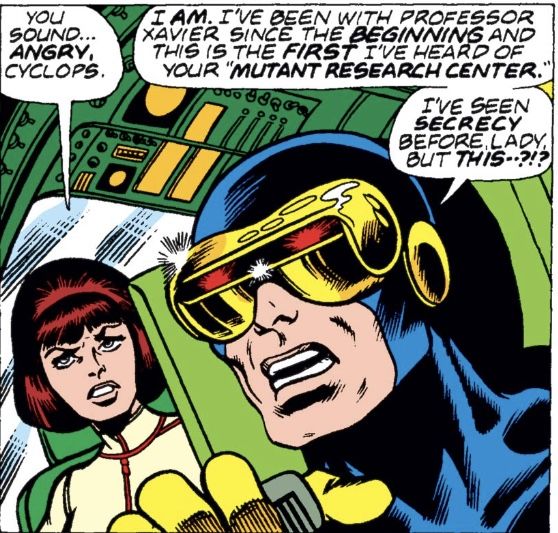 Scott is extremely annoyed by this — again, Xavier has withheld information from the X-Men that could have been helpful given their job occupation, especially if there was a chance they’d have to deal with someone like Magneto. There is nothing worse than upper management withholding important information from their employees when it could help them. What trust is there to be had when he can’t be upfront?

The X-Men survive their encounter with Magneto only to have to deal with Eric the Red, who has summoned Firelord to kill them and Charles Xavier. This fight brings them back to the States, where Jean is now out of the hospital and back at her apartment with Misty Knight, her parents, and Xavier. Lilandra Neramani appears out of nowhere, seeking help when she is taken through a portal by Eric the Red, who had come to Earth to capture her. Xavier, who has known this woman no more than two minutes, snaps at Jean because he doesn’t believe there is any way to save Lilandra.

Jean, who almost died a few days earlier, was only trying to tell her hysterical parents there was no time to explain what was going on because she was trying to save Lilandra by using her Phoenix powers to open the gate. Xavier has been an emotional wild cannon, and his reaction to Jean is condescending, especially after she just saved all of their lives from the solar flare. If she was capable of doing that, Xavier should know that Jean wouldn’t speak lightly about what she could do. Instead he's that boss who sees their employee go above and beyond, time and time again, but still questions her abilities. It’s trash. All he has to wish Jean and the rest of the X-Men is a piece of good luck when they go through the portal to save Lilandra. They bring Xavier’s little girlfriend safely back, and were they offered any kind of counseling after such a hellish week? Of course not.

Fast-forward to the Dark Phoenix Saga when the Dark Phoenix finally takes over Jean, all thanks to Xavier and his attempt to suppress the Phoenix in Jean, which only helped it manifest itself more viciously than before. Scott along with the rest of the X-Men are tasked to take out their good friend, Scott ultimately being the one to do it. Scott leaves the X-Men, we get Kitty Pryde as the newest member of the team, and it's back to business as usual.

If there was any grief counseling provided it's not shown and highly doubtful, because as we find out in later issues the X-Men are still dealing with Jean’s death and it's affecting their performance. Sure, being a superhero means the death of a teammate is a probability, but not to provide adequate mental care after is reckless. Workplace trauma is real, and one would think that a telepath such as Charles Xavier would understand that, or at least bring in someone who does. Instead, he just replaces an X-Men member with another body.

The Dark Phoenix Saga is only the beginning of more turmoil to happen to the X-Men and their lack of support from Xavier. Being an X-Men is definitely a stressful gig but, as Charles likes to remind them, at least they have a roof over their heads and a place to lay their tired tormented minds at night.

16 hours ago
See All Posts
Editor's Picks
Get Tickets