I'm betting I'm not the only person counting down the days until we can put 2020 in our permanent rearview. The onslaught of life-affecting news during the past 11 months has been relentless and I'm sure has made this year almost too much to bear. It really is incredible how much life has changed since March, when the pandemic really hardened its grip on much of the planet.

No summer blockbuster season at the movies, no fall Oscar bait, and no holiday movie season.

And just when I start whining and complaining about how much I miss all those activities, I remember this: More than 250,000 Americans have died from COVID-19, and more than 1.4 million people worldwide have lost their lives to the virus.

I remind myself of those numbers to give myself some perspective.

It's been a hellacious year for just about everyone, in varying degrees. But there are some people who have lost people they love, people who are an indelible part of their lives. When I look at it that way, missing out on a year of conventions and trips to the movies just doesn't seem to matter much to me now.

Comics, however, always matter to me. In fact, they've mattered as much as they ever have to me this year. My first trip to a comics shop after stores reopened earlier this year felt somewhat like a return to church. I love the damned things, as I'm sure many of you do. So once again, with a special tip of the cap to Furman Bisher, one of the great newspaper columnists of all time, here's What I'm Thankful for this year:

I'm thankful for The Department of Truth. Dayum, have James Tynion IV and Martin Simmonds created something that is superglued to the present-day, post-truth world we're living in. I mostly "wait for the trade" these days, but this is one of the few comics I get on a monthly basis.

I'm thankful for writer Gerry Duggan and artist Stefano Casselli for the best X-book on the market right now, Marauders. It's the high-seas, high-stakes mutant adventure serial we didn't know we needed, and now we have it.

I'm thankful I still remember attending C2E2 back in March, the last convention before the world changed. The way this year is going, I expect my mind to convince me I just imagined talking to people on the convention floor for our Robin retrospective.

I'm thankful for SYFY adapting the Dark Horse series Resident Alien because it gave me the chance to spend 30 minutes on a Zoom call with co-creator Peter Hogan. Not only was it incredible to talk with him in detail about the comic (which is brilliant) and the TV series it inspired (I've seen the pilot; it's really good!), but I also got to pepper him with questions about his time as editor for rock legend Pete Townshend's book imprint. I can talk The Who for days, and Peter was kind enough to indulge me with some cool bits of rock history. Also, his favorite Who song is "Bargain" — excellent choice!

I'm thankful for this unbelievable Batman and Robin piece I commissioned from art superstar Lee Bermejo. I'm sure some of you know which artist Lee is paying homage to here.

I'm thankful to Kelly Sue DeConnick for keeping her promise to me and not killing Aquababy Andy. Kelly Sue's run on Aquaman was incredible, one of the best eras the King of the Sea has had in years. It deserves all of the praise.

I'm thankful for another instantly-classic take on an iconic DC hero, the Hawkman series by writer Robert Venditti and great artists such as Fernando Pasarin and Bryan Hitch. This series was a gift from heaven to Hawk fans like yours truly. The final issue, #29, provides a touching coda to the story Venditti and his creative partners told of Carter Hall and Shayera.

I'm thankful for Judd Winick and his fantastic kids' graphic novel series, Hilo. My youngest daughter Talia is hooked on the books, and reading them with her — and sounding out all the Simonson-esque sound FX in the stories — put a smile on my face every. single. time.

I'm thankful for the reboot of the Animaniacs somehow being better than it has any right to be, and not making me look like an idiot with my girls for talking up the original. The world is a better, funnier place with Yakko, Wakko, and Dot back in play.

I'm thankful for my book for Insight Editions, Wonder Woman: Wisdom Through the Ages. It's a pocket-sized hardcover I wrote full of Diana's most memorable quotes. As research, I read hundreds of Wonder Woman comics dating back to the 1940s. As expected, the quality varied. But you know which WW era I gained a new appreciation for? The late '60s, which featured the de-powered version of Diana Prince. I dig the super-spy Amazon.

For getting a chance to read Abraham Reisman's book, True Believer: The Rise and Fall of Stan Lee. The pandemic bumped this book from its original September release until February 2021. Trust me when I say it will be well worth it to read. It is illuminating, it is tragic, and it is disillusioning.

I'm thankful so many snazzy comic book T-shirts are available — and Gods know I own way too many already — but is it too much to ask for someone to put out an official and high-quality Dazzler tee?

I'm thankful for Leah Williams and artist Carlos Gomez for The Amazing Mary Jane. It was a long-overdue spotlight series for Marvel's best non-powered character, and I wish we had gotten to see more. It was clear to anyone who read the series that Williams understood what made MJ such a fan favorite. Silver lining? Ms. Watson is free to take a prominent spot again in Amazing Spider-Man, hint-hint Nick Spencer. :) 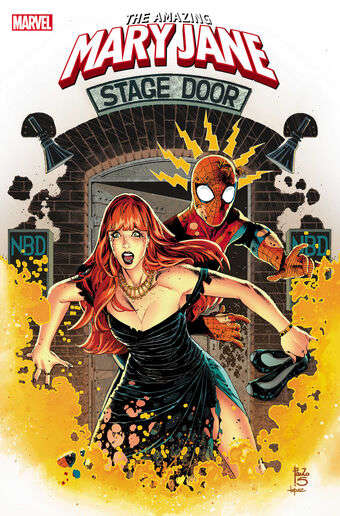 I'm thankful for Gail Simone. She's an incredible writer and a mad genius at social media. Her Twitter trolling is so good, it's like she has a cheat code. But even more than that, Gail is a good person. She spearheaded the #ComicsWriterschallenge fundraiser that collected roughly $300K for Black Lives Matter. It was her effort that inspired countless other comics pros to step up.

I'm thankful for comic book stores. I didn't realize exactly how much until I couldn't visit them. When my LCS in Miami was able to reopen, stepping back inside felt like putting on that old leather jacket you've had for way too many years. It may have a few scuffs, but it still fits just right.

I'm thankful for being able to see the Savage Dragon cartoon again for the first time in nearly 30 years. It's on the Peacock Network.

I'm thankful for everyone who watched and commented on the documentary Todd McFarlane: Like Hell I Won't. Creating top-shelf content centered around the greats of the comics business has been a longtime goal of mine, and this documentary was the realization of that ambition. I'm immensely proud of the entire team of people who put together this doc on Todd, one of the towering figures in comics over the past 30 years. It won't be the last.

Also, I'm grateful for the return of gunslinger Spawn.

I'm thankful for being able to convince the PTBs to let me do a video tribute to the great John Romita, Sr. The man is as responsible for the worldwide success and popularity of Spider-Man as anyone, and my only regret is that I couldn't make it twice as long. Jazzy John is the greatest.

I'm thankful for being able to do video essays like examining the legacy of The Dark Knight Returns, and another where I got to heap praise on one of my favorite cult favorites, Squadron Supreme.

I say this all the time, only because it's true: I can't believe I get paid to do the work I do. I'm immensely grateful for the platform Behind The Panel affords me. How much longer I'll get to do it is anyone's guess, and if there's one thing we should all know after the year we've had, is that things can change at a moment's notice. But until that changes, I'll continue to squeeze as much enjoyment out of this gig as I can. It's important to acknowledge those things that are worth it. And this job is one for me.

Want to share what you're thankful for? Find me on Twitter/Facebook/Instagram and let me know.

It's a fan thing
Join SYFY Insider to get access to exclusive videos and interviews, breaking news, sweepstakes, and more!
Sign Up for Free
All Posts About
Comics
Features
Aquaman
Behind the Panel
Thanksgiving
Todd McFarlane
opinion
Related Stories