One thing being a millennial afforded me as a kid was the ability to see a bit of the past while the present around me was rapidly changing. Not only did I get to watch tubular teen shows and zany cartoons, but I could also tune in to reruns of syndicated ‘60s shows like Bewitched, starring Elizabeth Montgomery and Dick York (later replaced by Dick Sargent).

For those who need a quick plot summary, the show (which got a big-screen facelift in 2005 with the film version starring Nicole Kidman and Will Ferrell) centered around a young woman named Samantha who falls for a New York City ad exec named Darrin Stephens. The two have a whirlwind courtship and get married. After their nuptials, Darrin learns his wife is a witch (gasp) and the two must find a way to live a normal, typical life in the midst of the supernatural hijinks that come their way. As a kid, I always found the show entertaining — from the mod fashions to Montgomery's natural charm oozing into Samantha's warm yet sly smiles, and, of course, that magical, wiggling nose. How many of us have attempted to twitch our noses and hoped for something to appear?

But for all the fun and fancy the show afforded us, there was something lurking beneath the surface that I always had a problem with: Darrin's contempt for Samantha's witchcraft.

Imagine for a second having to hide who you are because you were afraid the world would shun you for being what you were born to be. Then imagine loving someone and exposing that side of yourself, only to be met with thinly-veiled disgust. Imagine being asked to hide who you are from everyone and being told to suppress that identity, in your own home no less, to avoid suspicion. The feeling is all too relatable, and while you may think I'm speaking of a personal experience, this was actually the core of the show: Samantha, a powerful witch, is asked by her husband to keep her magic to herself.

Now, to be fair to Darrin, Samantha was not forthcoming about her witchcraft. And not only did he learn about it after they became engaged, but Samantha did also agree to go forward in their marriage as close to the guise of a mortal as she could. For this, Darrin isn't a complete tool. It's his actions towards her later moments of tapping into her core self that makes him a big ol' wet hose. 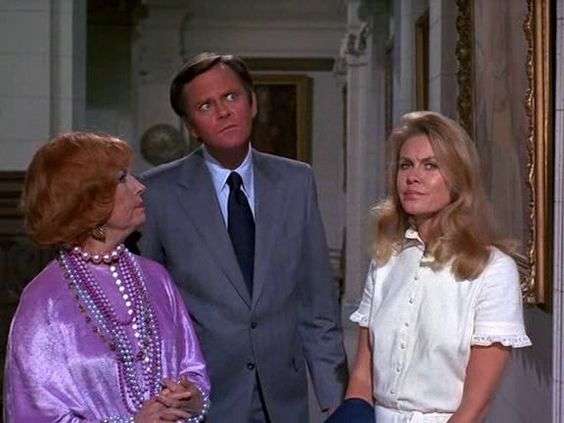 First, there's his blatant disregard for Sam's family. While there is an equal distaste between Darrin and his mother-in-law, Endora, the other members of Sam's extended family aren't so mean to her husband. While they can't understand why she chose to marry a mortal, for the most part, they were cordial to him and accepted their union. Darrin, on the other hand, would at times show his disdain for Sam's relatives and often nudge her to get them to leave or not "cause trouble." It was in this figurative finger-wagging (which was occasionally even literal finger-wagging on the show) that Darrin showed his true colors.

In episodes where Samantha's magic backfired, she was deeply apologetic. And rather than accepting that his wife was trying to do a good deed, Darrin would give his wife an "I told you so" look before having her tell him he was "right" about her using magic. Meanwhile, in the instances in which Sam's magic benefited him greatly — knowingly or not — Darrin was very open to letting the magical meddling slide.

It's one thing to ask your wife not to practice magic around guests or business partners who didn't need to see that side of her, but it's another thing to be annoyed at your wife being who she is, even in her home. Was teleporting a glass of lemonade from the kitchen really going to hurt anyone?

To make matters worse, not only did he request that Samantha deny who she was both in public and private, but he also didn't even think to change his mentality about witches despite being married to one. In a Halloween-themed episode (Season 1, Episode 7, "The Witches Are Out"), Samantha had to force Darrin to see the errors in his ways when he is asked to use the stereotypical depiction of witches in an advertisement. Darrin refused to acknowledge why this depiction of witches bothered his wife, and it wasn't until Sam hexed her husband to look like a haggard witch himself that he developed an understanding.

While Sam's little trick may have made him change his mind on the look of witches, however, it didn't do much to change his bigoted views when it came to the issue of starting a family. With the birth of their daughter, Tabitha — and later their son Adam — Darrin was in constant fear of having children who would grow up to inherit their mother's witchy characteristics. But by replacing the term "witch" with some other identity, you can see how easily his actions can be translated for real-world situations. And by those standards, Darrin was a selfish husband who couldn't see the benefit of being open to explore his wife's culture as a way to demonstrate his true, undying love to her.

In these times, we could all use a little magic, but Darrin Stephens hated it — and for this, his wife Samantha deserved so much better.

It's a fan thing
Join SYFY Insider to get access to exclusive videos and interviews, breaking news, sweepstakes, and more!
Sign Up for Free
All Posts About
Fangrrls
TV
Bewitched
witchy wednesday
Related Stories

Morticia Addams: A witch icon worthy of all the praise