Barney, everyone's favorite purple dinosaur, is getting a bring screen reboot from...Daniel Kaluuya? Today, Variety confirmed that the Get Out star has partnered with Mattel Films for a film adaptation of the iconic kid's character from the 1990s. However, this project won't just involve a dude in a suit on local access television. This is a wholly reimagined take on the IP.

“Working with Daniel Kaluuya will enable us to take a completely new approach to Barney that will surprise audiences and subvert expectations,” said Mattel Films’ Robbie Brenner in a statement run by Variety. “The project will speak to the nostalgia of the brand in a way that will resonate with adults, while entertaining today’s kids.”

“Barney was a ubiquitous figure in many of our childhoods, then he disappeared into the shadows, left misunderstood,” added Kaluuya. “We’re excited to explore this compelling modern-day hero and see if his message of ‘I love you, you love me’ can stand the test of time.”

The Boys is going to get even funnier during its second season, because the Amazon series will feature comedian Patton Oswalt in a mystery role, showrunner Eric Kripke confirmed on Twitter.

"Thank you @pattonoswalt, that was AMAZING!" he wrote, adding the tags and hashtags of "#TheBoysTV #Season2 #SecretRole@TheBoysTV #TheBoys @PrimeVideo #SPNFamiIy."

As Entertainment Weekly points out, fans are already theorizing that Oswalt might be playing The Legend, "a former comic book writer and editor with an encyclopedic knowledge of superheroes."

Whatever character the comedian is playing, he's just one of the new faces in Season 2 alongside Goran Visnjic and Claudia Doumit.

Based on the wildly violent and explicit graphic novel by Garth Ennis and Darrick Robertson, The Boys follows a group of normal humans who exact revenge on superheroes when they step out of line. Karl Urban and Jack Quaid lead the cast as Billy Butcher and Hughie Campbell.

Doctor Strange 2 (aka In the Multiverse of Madness) has found its screenwriter in the form of Jade Barlett, writes Collider.

Since the film is described as the MCU's first horror movie, Barlett seems like the perfect fit, having co-written Floria Sigismondi's The Turning. 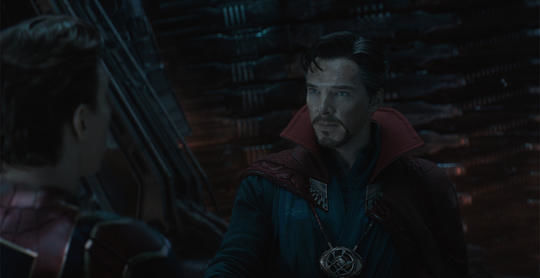 The sequel will not only serve as a follow-up to the first Doctor Strange movie, but also serve as an epilogue to the events of Disney+'s WandaVision series. Elizabeth Olsen's Scarlet Witch is set to play a major role in Multiverse of Madness alongside Benedict Cumberbatch's Stephen Strange and Benedict Wong's...Wong.

Doctor Strange in the Multiverse of Madness will open a portal into theaters on May 7, 2021.