Bill & Ted face their great leader, and Emile Hirsch, Bruce Dern, and Grace Park get freaky in the trailer for a new sci-fi thriller, and the set of HBO’s new sci-fi comedy get damaged in a fire in this edition of SYFY’s WIRE Buzz.

First up, Bill & Ted Face the Music has landed its Great Leader! Per Deadline, which broke the excellent news, the Emmy Award-winning Holland Taylor (The Practice, Mr. Mercedes) has been cast as the most powerful person in the universe in the third and upcoming entry in the Bill & Ted film series.

Bill & Ted Face the Music follows Bill & Ted as middle-aged dads who must go on another time-traveling adventure with their two daughters (but without Rufus, sadly) to find the inspiration needed to write the best song in the world that will save the universe.

Next, in the trailer for the upcoming Freaks, Lexy Kolker plays 7-year-old Chloe, who’s being kept locked inside her home for her own safety by her father (Emile Hirsch). She’s fascinated by the outside world, where “Abnormals” are apparently some sort of unspecified threat. She also has memories of her mother being taken away by armed men.

Chloe also encounters an old man (Bruce Dern) who runs an ice cream truck and tells her he knew her mother. And oh, hey! There’s Grace Park (Battlestar Galactica) in the mix looking intense and reminding us of Peter Coyote’s role in E.T. The Extra Terrestrial.

So, just what the heck is going on here? The trailer does its best to convey a very ominous and mysterious tone. 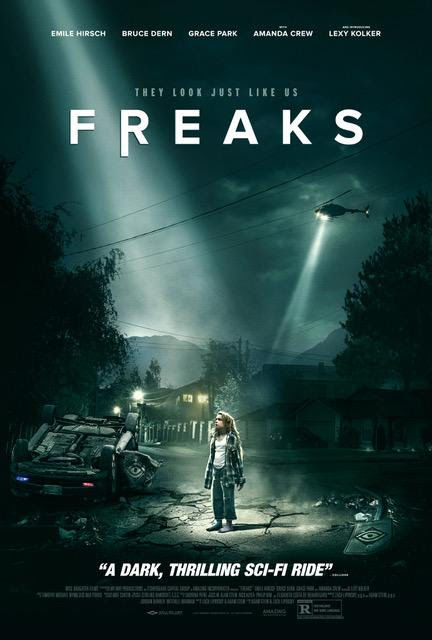 A fire that broke out at Warner Bros’ Leavesden studios just outside London has damaged the set of HBO’s new space tourism comedy Avenue 5, the network confirmed.

No injuries have been reported and no other sets were impacted. The cause of the fire, which took 15 hours to extinguish, has not yet been determined.

“The fire at Warner Bros. Studios Leavesden has affected one of the sets of HBO’s Avenue 5,” said an HBO spokesperson in an emailed statement. “Production continues as the producers and writers assess the best plan to complete filming of the final two episodes of the series.”

“On behalf of the entire cast and crew of Avenue 5, I want to thank the firefighters who’ve been working tirelessly throughout the night to keep everyone and everything safe,” said Iannucci in a statement published by media outlets. “I send my thoughts to the residents in the area who were disturbed by the night’s events. It was a beautiful set, but everyone’s safety is the main priority. The season is near completion, and everyone is determined to carry on.”

The 20 greatest threequels ever made

Look of the Week: The most triumphant style of Bill and Ted's daughters