The Amazons of Themyscira may end up lassoing an animated series from Wonder Woman director Patty Jenkins. Recently speaking with Empire, the filmmaker mentioned the idea in passing, but didn't offer any further details as far as we know. Jenkins has already sold a live-action Amazon spinoff pitch (conceived with Geoff Johns) to Warner Bros. Whether she'll direct is another story, but she did confirm that the project would be "part of the in-world story" of her two Wonder Woman films.

And then there's the question of a follow-up to Wonder Woman 1984. As usual, Jenkins was vague in her answer to Empire, but that's to be expected since the second movie isn't even out yet.

"You’re enjoying the movie you’re making and also reflecting on what could be different or better in the [real] world. And therefore what story you want to tell,” she said. "That’s the greatest thing to me about superhero stories. You’re able to have a dialogue about what a hero would be right now. So yes, I have ideas for what I’d like to say, and Gal does too."

WW84 is slated to hit theaters Friday, Oct. 2. The project will be featured at DC FanDome in late August.

Studio Ghibli's next animated project, Earwig and the Witch, will reach North American audiences through usual vendor, GKIDS. Based on Diana Wynne Jones' 2011 novel of the same name, the movie is about an orphan named Earwig who is adopted by a selfish witch. Rendered with CG-animated 3D modeling, it's an obvious deviation from Ghibli's hand-drawn 2D efforts.

"Nowadays, in our country, there are many adults and few children. It must be tough for these children, so few of them having to deal with so many adults," director Goro Miyazaki (the son of Ghibli founder, Hayao Miyazaki) said in a statement. "It was while I was thinking about this that I got to know Earwig. And I realized, 'That's it!' How does Earwig deal with the annoying adults? Please watch Earwig and The Witch to find out. She may be cheeky, but I sincerely hope that our adorable Earwig will encourage children and cheer up adults." 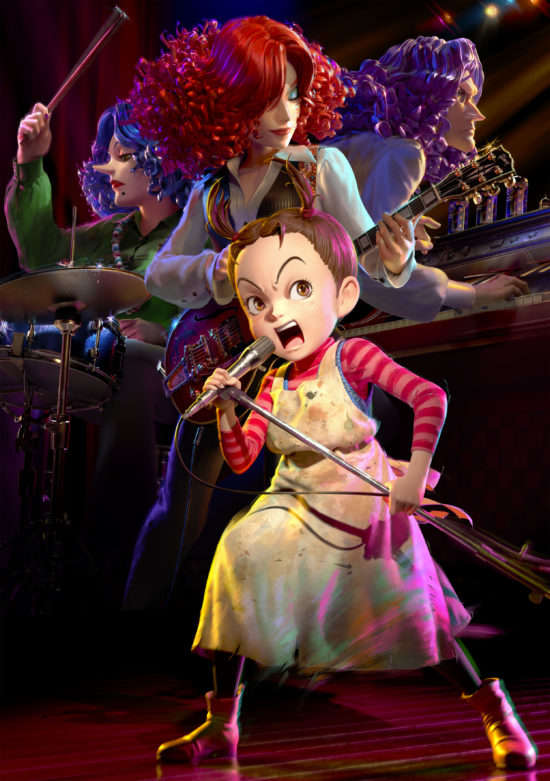 "A new Studio Ghibli film is always a cause for celebration for fans around the world," added GKIDS' president David Jesteadt. "We are excited to see Goro Miyazaki and Studio Ghibli working in a new animation style, and look forward to sharing the film with audiences early next year."

Earwig and the Witch is part of this year's virtual Cannes lineup and will make its debut on NHK in Japan this winter before hitting North America early next year. It's unclear whether it'll be dubbed for English-speaking audiences.

Nickelodeon is teaming up with James Corden and Ben Winston's Fulwell 73 for an animated series adaptation of Real Pigeons Fight Crime. Written by Andrew McDonald and illustrated by Ben Wood, the book is about a group of pigeons that secretly fight injustice.

"We are so delighted to be working with our great friends at Nickelodeon on this wonderful, charming and funny book, and can’t wait to help bring it to life for kids everywhere!" Winston said in a statement.

"Real Pigeons Fight Crime is about a secret squad of crime-fighting pigeons, with high stakes and true hilarity making it a perfect fit for our audience," added Ramsey Naito, Executive Vice President, Nickelodeon Animation Production and Development. "By fusing the humor and expertise of this the incredible team at Fulwell 73 Productions, we are ready to show kids what pigeons really do — fight crime, solve mysteries, take down bad guys, and keep neighborhoods safe!"

Published in January of this year, McDonald and Wood's book is available in over 10 territories, including North America. A sequel, Real Pigeons Eat Danger, went on sale in early May. The third entry, Real Pigeons Nest Hard, goes on sale Sep. 1.

6 hours ago
See All Posts
Editor's Picks
Get Tickets