The Living Dead, the unfinished zombie story conceived by the late George A. Romero, will shamble into stores from Tor Books on Aug. 4. This lengthy novel, started by Romero more than 10 years ago, has been finished with the full cooperation of the Romero estate by New York Times bestselling author Daniel Kraus.

No stranger to high profile collaborations, Kraus also co-wrote the Trollhunters book with director Guillermo del Toro, which was adapted into the Netflix animated series, as well as the novelization of del Toro's Academy Award-winning The Shape of Water. Kraus is a life-long Romero historian and zombie flick aficionado, and the Romero estate recruited him to complete the horror icon’s sprawling manuscript that he abandoned before his death.

The 650-page book, set in modern times, chronicles the first seeds of an undead pandemic and the global crisis of its apocalyptic aftermath. The story begins with two medical examiners who discover themselves battling a deceased man who won’t stay dead. The narrative then picks up years later after the calamity spreads worldwide, as we visit disparate segments of America, from a Midwestern trailer park to an infected naval aircraft carrier, an abandoned cable TV news station, and a federal records facility where a woman with autism documents the plague's horrors for posterity.

SYFY WIRE spoke with Kraus about his dream project crafting a zombie epic sprung from the mind of the man who invented the Hollywood zombie craze, conducting research aboard the USS Intrepid, melding his writing style with Romero's, and delivering an ambitious zombie tale worthy of his legendary idol. 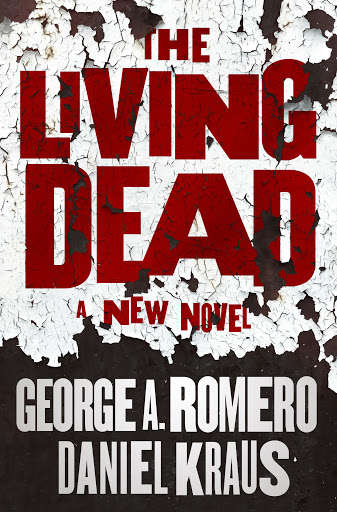 How did this posthumous George Romero project come together?

This was something I knew that George had been working on and off on for more than a decade. He’d mention it every once in a while in an interview or something, but those were just morsels.

In a world full of George Romero fanatics, you’d be hard-pressed to find one more fanatic than me. I literally grew up on his movies and he was almost like a father figure to me. The first movie I’d ever seen was Night of the Living Dead, and I’ve seen it since the age of five or six countless times.

As I got older, his movies really guided me and certainly affected that artist I became, and also the person I was. I became a real Romero acolyte and a scholar of all his stuff. No piece of art meant more to me than Night of the Living Dead, and no artist meant more to me, in any media, than Romero.

So it was quite the shock when I got this call from his manager about a month after he died in 2017, about the existence of this partial novel. I’d met George once socially and they knew that I was this superfan of George. And the fact that I’d just come off two collaborations with Guillermo del Toro meant that I was good at collaborating.

I think those two things combined made me as good a choice as any. So they kinda went with somebody who had a grasp of Romero totally, not just his zombie movies. He was greatly appreciative of all the things zombies had brought him, but what he was most passionate about tended to be his other films. That was something I was very cognizant of when I took on this project, that it had to represent George in total.

Can you give us an overview of the plot of The Living Dead?

It’s George wanting to reboot the story, which he did once with Diary of the Dead, and play it out from beginning to end. His movies had gone no further than five years in the future, and this was something that was going to go about 15 years into the future.

The idea was to take what he’d done in smaller doses — which was views of America throughout the decades — and construct one larger picture of the fall of America through the catalyst of the zombie plague. And that fall could represent a lot of things.

For that reason, it’s the equivalent of maybe five different George Romero movies intercut together, so we have a good cross-section of various socioeconomic classes, races, and politics. We see what it takes to survive, and more importantly, what kind of people it takes to try to rebuild America in a better way. It’s a gruesome reason to get a chance to do it over, but when given the opportunity, what kind of approaches might improve upon what we’ve done in the past.

When you first started working with the Romero estate, what was the condition of the manuscript and how did you adjust your style to fuse with his writing?

The manuscript varied greatly. There were parts of it that he clearly had gone over and edited multiple times because they were very polished. Then there were parts that were much sketchier that were clearly him getting down the ideas that were somewhat thin, and he had a lot of fleshing out still to do. Not all of it was limited to the first part of the book.

There was stuff that seemed to me to belong in the middle, and parts of it that seemed to be near the end. This was a much weirder challenge in that it was like a gap-toothed grin. It had pieces here and there and I needed to find a way to tie them all together, put in the connecting tissue, and come up with some of the bones, too. [Laughs.]

As far as style, it really wasn’t hard to meld them. I just took it on a sentence-by-sentence basis. George has his style and I have my style and I kind of came up with the Romero-Kraus style. I started with the work he’d done and reworked it as needed. Once I’d done that, I had a sense of it, so it wasn’t that difficult. A lot of the challenges had to do with plotting and to make it feel like a cohesive work. I knew his stuff well, his screenplays, and rare prose things he’s done in the past.

What were some of the more rewarding sections of the novel for you as a writer?

The most challenging was the section aboard the aircraft carrier. George hadn’t written much of that section, and what he had written made it clear he’d done a lot of research. I just knew nothing about it. It’s a massive topic; it’s like a floating naval city. So I did a lot of studying, visited the aircraft carrier USS Intrepid docked in New York City. The guy who gave me the complimentary tour was a huge Romero fan. He would even improvise ideas for where zombies could get sucked into for the book. [Laughs.]

Some of the most satisfying parts are the ones with Etta Hoffmann, the autistic government worker who essentially doesn’t mind the apocalypse. She wants to spend all her time alone anyway so when everyone flees Washington D.C., she stays behind and becomes the archivist of what’s been happening over these 15 years. I really liked writing that character, where I could do this broad, quick survey of all these years and what they meant.

When did you catch zombie fever and what are some of your favorites used as inspiration?

There’s Night of the Living Dead of course, and at some point in my high school era, I started seeing other zombie movies, renting stuff on VHS at local video stores. I saw the movie Zombie, but nothing sticks out to me like the Romero stuff. Night of the Living Dead continued to loom large, and Day of the Dead. Beyond that, weirdly enough there weren't a lot of zombie titles that raised much interest or influenced me. Even movies like 28 Days Later, and 28 Weeks Later, I can watch them and identify them as good, [but] they don’t do anything for me that trip that trigger like Romero’s movies do. His sympathy for the zombies, if anything, really stuck out to me.

One of the more unique elements to the book is the zombie POV chapters. What sort of mindset did you enter to write those effectively?

So the zombie POV chapters were part of Romero’s original manuscript but they didn’t look like that. I retooled them and they didn’t feel anything like his. But they were in there and he did intend there to be a zombie POV. I did a lot of thinking, sitting at a table with pencil and paper and wondering what it all means. What was he talking about with zombies? Where was he going with it?

I started thinking about issues of animals. He hinted many times near the end of his life that he was very interested in zombie animals. That was going to be one of the next things he took on. Land of the Dead had a zombie animal scene that got cut out at the last minute.

In the scene, zombie animals weren’t attacking live animals, they were attacking humans. Once I latched onto that, I began to realize this wasn’t a cannibal thing and there must be a method to it. So if all dead things are coming after humans, there must be a reason why. The zombies are here for a reason, therefore they have a common purpose, and I needed to represent that purpose in the POV chapters that are from them. That’s why those passages have this sort of collective feel.

What do you believe Romero would think of this finished collaboration?

If there was anything I’d want more, it would be to show it to him. The closest I have is his wife, Suzanne, who was there when he wrote and knew of his goals with the book. She absolutely loved the book and thought that no one alive could have done any better. For me, that was the only review I needed and it made me feel so good to hear that.

Ultimately this is a Romero-Kraus book. There wasn’t enough of his book that I could just seal up some cracks. This is a 50-50 collaboration and there are undoubtedly steps taken that he wouldn’t have liked, and by the same token, there are a few scenes he wrote that I cut out that just didn’t fit. And I hated that! But that happens with any successful collaboration. I would hope that he would be pretty excited by what we came up with.

It's a fan thing
Join SYFY Insider to get access to exclusive videos and interviews, breaking news, sweepstakes, and more!
Sign Up for Free
All Posts About
Features
Movies
Daniel Kraus
George A. Romero
Interviews
books
zombies
Related Stories