In a heavenly union of two top-tier sci-fi fantasy franchises, IDW Publishing is delivering a killer crossover of epic dimensions as the Transformers' robots in disguise tangle with Ghostbusters' paranormal investigators in this month's Transformers/Ghostbusters #1. 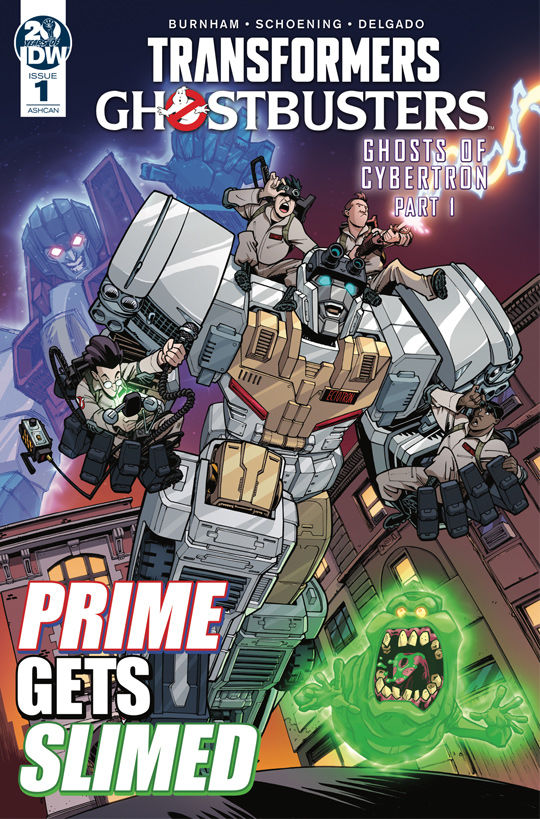 Its spooky “Ghosts of Cybertron” storyline finds the noble Autobots fleeing from the savage war that destroyed their home planet of Cybertron. Their sensors trace a stray Cybertronian signal to the planet Earth, where Optimus Prime and his sentient robots investigate the otherworldly source on this bright blue world and encounter the infamous team of supernatural sleuths: Venkman, Spengler, Stantz, and Zeddmore!

This amazing union also ties in directly to the announced toy release and features appearances by the awesome new Transformers character Ectotron.

"We’ve been calling Transformers/Ghostbusters (the 'Ghosts of Cybertron' storyline) 'The Crossover Event 35 Years in the Making,' but once we got started, we quickly realized it’s the crossover that was ALWAYS meant to be – it’s that much fun," Editor Tom Waltz tells SYFY WIRE. "And who better to bring it all together than the superstar creative team of Erik Burnham, Dan Schoening, and Luis Antonio Delgado, the undisputed champions of awesome ’80s mash-ups!"

Writer Erik Burnham reveals some of the storytelling secrets in our exclusive page breakdown of the premiere issue and an illuminating look at Dan Schoening's concept art and character sketches in the full gallery below.

Erik Burnham: When fans first caught wind of this project, they had theories … a lot of theories! And they especially had theories about what the story was obviously going to include. Surprise! We’re opening issue one with Gozer the Gozerian traveling to the world of Cybertron, home planet to the robots in disguise ... and the god of destruction won’t predictably be met with the heroic Autobots, no – it’s the Decepticons who are on hand for this arrival!

EB: I can’t imagine that going well ... but at the very least, we can be sure no Decepticon will choose a giant marshmallow man as the form of their destruction, right? From the word “Go” – from the very second I was asked to come up with a story – this was the opening. Cybertron, Gozer, and the Decepticons. You have no idea how excited I was that everyone else loved it right away.

EB: On these next two pages, we’re on Earth – and the Ghostbusters are encountering the one Decepticon who is no stranger to being a ghost in the overall canon: Starscream. This is another thing that fans have called out from the second the crossover was announced. Clearly Starscream’s ghost will be in it. And hey, he’s probably the Big Bad! I think it’s always best to have all the information before you guess, but at the very least – don’t place any bets!

EB: Starscream has been a blast to write, and so has his interaction with the Ghostbusters. He has such an irritating way about him, and he should probably watch his tone around beings who can easily put him in a tiny little box.

There’s so much fun to be had in this series – and no fan predictions have been better than half right! My only regret is that, with just five issues, we’ll never be able to get in everything we’d love to see. But hey, if it flies off the shelves, we can all meet back here for the sequel … sound good?

Now check out Dan Schoening's thumb sketches and pen illustrations with Nick Roche's cover process pages below, then tell us if you'll be compelled to pick up the debut issue of Transformers/Ghostbusters #1 on June 19.