Houston, we have a premiere date for Space Force. Netflix's workplace comedy about a group of government employees tasked with setting up a sixth branch of the armed services (the titular force against cosmic threats) will make its streaming world premiere Friday, May 29.

Take a look below:

The story begins when Mark (a four-star general, who is skeptical about the Space Force program) uproots his family and moves to a remote base in Colorado. There he and a collection of "Spacemen" are "tasked by the White House with getting American boots on the moon (again) in a hurry and achieving total space dominance," reads the official press release.

Kudrow's character is described as "a Washington Air Force wife who has sublimated parts of herself to her husband’s career for two decades. But as he takes on his biggest challenge, she is growing in a different direction."

The show hails from Carrell and Greg Daniels. Both are serving as producers, while Daniels takes up the post of showrunner. Howard Klein of 3Arts Entertainment (The Office) produces as well.

A real-life version of Space Force does exist, the U.S. Space Command.

Deadline brings news that actor/writer/comedian Stephen Mangan (Green Wing, Episodes) has been tapped to adapt Harry and the Wrinklies for the big screen. Mangan is very well suited for the job, as he once narrated the audiobook version of Wrinklies. The film rights were optioned by Bird Flight Films.

Written by Alan Temperley, the novel for young readers tells the story of a young boy named Harry who is sent to live with his two elderly aunts after the tragic death of his parents. Expecting to be bored out of his mind, Harry receives a shock upon learning that his aunts aren't quiet old ladies but Robin Hood-esque thieves who battle social injustice with their band of merry heisters.

“I watch a LOT of family films with my children and I know which ones make each of my kids laugh and which ones I can watch on a loop without wanting to throw the TV out of the window,” Mangan said in a statement to Deadline. “The best are smart, funny and inspiring no matter what age you are and Harry And The Wrinklies is the epitome of this. It has such a wonderful sense of mischief and anarchy and is the perfect jumping off point for an adventure caper that will make the whole family laugh.” 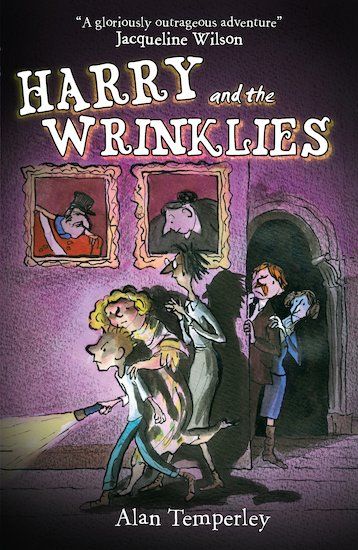 “I am delighted to have been approached by the very positive, get-up-and-go Bird Flight Films who wish to make a movie of Harry And The Wrinklies. Excellent news also that Stephen Mangan is writing the screenplay,” added Temperley in a statement of his own. “He read the original audiobook with a great sense of style and fun. Since then he has gone from strength to strength and I can’t think of anyone better to develop Harry for the big screen.”

While the premise does sound a bit like Harry Potter (a boy named Harry learns about a fantastical world he never knew about after his parents die), Temperley's book was published around the same time as the first novel in that series, Sorcerer's Stone, in the late 1990s.

Harry And The Wrinklies was turned into a television show, which ran on ITV for a total of three seasons and 19 episodes between 2000 and 2002.

Sony Pictures is the latest entertainment entity to announce a hub of kid-friendly activities for families currently sheltering in place amid the coronavirus pandemic.

“A significant portion of Sony Pictures’ workforce is made up of working parents. The idea of Sony Pictures’ Kids Zone was born from parents on our own team adjusting to working from home and managing home schooling,” Lexine Wong, senior executive vice president, worldwide marketing, said in a statement. “We are proud to offer this resource to help families navigate these new and challenging circumstances, while hopefully having a little fun in the process.”