Ever since they were first named in 2015, Star Wars fans have been eager for any scrap of information we can get about the Knights of Ren. For a long time we knew almost nothing, but thanks to the release of The Rise of Skywalker and its various tie-in materials, we're learning quite a bit more about the Knights even as much of their history remains shrouded in mystery. Now, thanks to the latest issue of Marvel's The Rise of Kylo Ren, we know how a young apprentice named Ben Solo first met them.

**Spoiler Warning: There are spoilers for Star Wars: The Rise of Kylo Ren ahead.**

The Rise of Kylo Ren — a four-issue miniseries from writer Charles Soule, artist Will Sliney, colorist Guru-eFX, and letterer Travis Lanham — is working to shed more light on the Knights of Ren in a way that the sequel trilogy of films never did, and it's doing it by casting them as legendary figures of the Dark Side. The Knights were introduced in the first issue of the miniseries as a Force of chaos and consumption in the galaxy. Led by a helmeted, lightsaber-wielding man who calls himself Ren, the Knights are governed by the philosophy that they cannot and will not deny their nature, and therefore take what they want, when they want. To join their ranks, you have to prove that you can "touch the Shadow," as they call it, and pay homage to them with a "good death."

At the end of the first issue, Kylo Ren leaves the burning Jedi Temple of Luke Skywalker to join Snoke on a strange artificial garden world, and mentions to his new Master that he's been thinking about the Knights. Issue #2, which arrived this week, explains why.

Much of the issue takes place in flashback, as a younger Ben Solo journeys with his Uncle Luke Skywalker and Luke's friend Lor San Tekka (the guy from The Force Awakens who gave Poe Dameron the map to finding Luke) to Elphrona, a planet far from the Galactic Core that's home to an old Jedi outpost. Luke's there looking for artifacts of the Force, something he did a lot back in those days, and while Ben is along for the ride, he also already has Snoke's voice inside his head, prodding him about Luke's tendency to make him hold back.

When they get to Elphrona, the trio do indeed find a treasure trove of Jedi artifacts, but the Knights of Ren got there first. Luke takes on the Knights by himself in a seven-to-one fight, and seems to beat them easily, but Ren gives the Jedi Master pause by activating a "kill switch" on his lightsaber that will cause it to explode and kill them all if he drops it for any reason. It's during this standoff, as Luke tries to get the Knights to retreat, that Ren reaches out to Ben in an attempt to appeal to his darker tendencies. 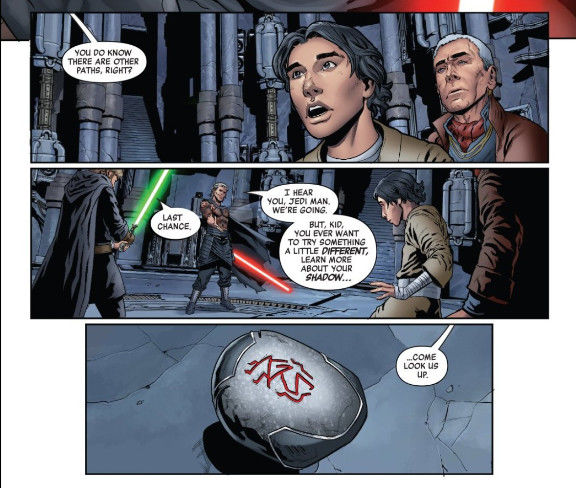 So, while Snoke was already in Ben's head, Ren also planted a seed in the young Force user's mind, a sense that if he didn't fit in with the Jedi he might find somewhere else to call home. With that in mind, after leaving the temple to join Snoke, Ben returned to Elphrona to find that Ren's runic helmet was still exactly where the Knight had dropped it so many years earlier. 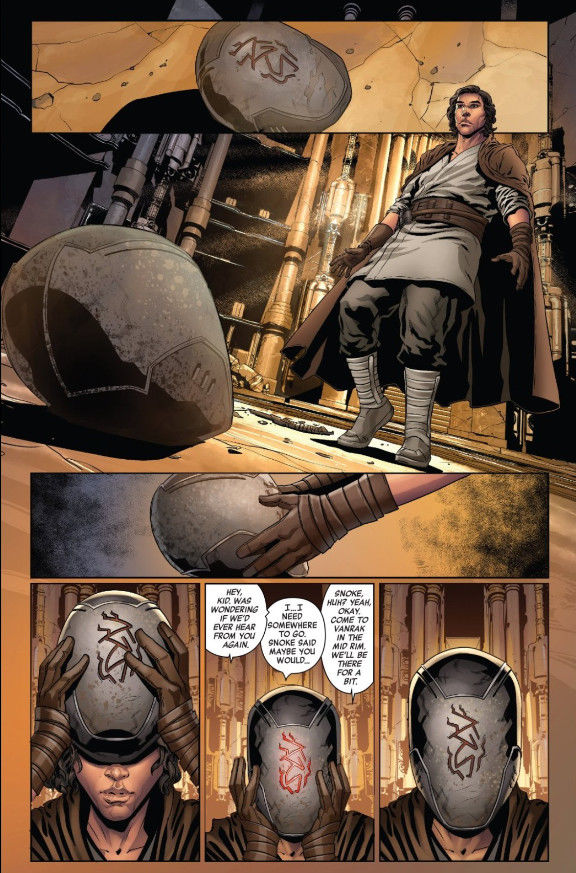 We don't yet know how much Snoke and the Knights were aware of each other (if at all) at the time this little trap was set, but it's clear that Ren was confident in Ben's darkness. His effort, along with Snoke's musings earlier in Issue #2 about how Ben should embrace the "true" name he'd imagined for himself since he was a boy, clearly paid off. Now we get to see exactly how Ben Solo's second encounter with the Knights will play out. We know from the films that the leader of the Knights who calls himself Ren is no longer among their number, which suggests that Ben will kill him to take his place as the Master of the Knights. We'll find out soon enough. The Rise of Kylo Ren #3 is in stores February 12.

It's a fan thing
Join SYFY Insider to get access to exclusive videos and interviews, breaking news, sweepstakes, and more!
Sign Up for Free
All Posts About
Movies
News
Kylo Ren
Star Wars
The Rise of Kylo Ren
marvel comics
Related Stories

James Bond produces are looking for the next villain

To communicate, most birds sing, woodpeckers play the drums

How the COVID-19 pandemic led to 'The Winchesters'