Van Helsing: How do the SYFY show's vampires stack up against vampire-kind?

In just a few short weeks, SYFY’s Van Helsing will complete its fifth and final season, closing the coffin for good on Friday, July 9. Van Helsing was not the first (nor will it be the last!) show to take a stab at telling the legend of the vampire. For centuries, cultures across the world have told stories of various blood-sucking creatures, from the manananggal of the Philippines to La Patasola of South America, to mass vampire hysteria in 18th-century Europe. Perhaps the most famous vampiric figure, Count Dracula, was immortalized in Bram Stoker’s 1897 gothic horror novel Dracula. Countless interpretations of Dracula and other vampires have followed, and pop culture continues to be entranced.

In honor of Van Helsing’s final season, we’ve taken a look at our favorite vampires of film and television, and how they each fit into their respective worlds. The sheer volume of vampire content inhabiting television, film, and streaming markets is vast, and still, the consumer appetite is insatiable. Therefore, it’s impossible for us to hit on all the major blood-suckers. We’ve chosen instead to highlight the movies and shows that we believe had the largest impact in moving the genre forward, following the evolution of vampires from the first on-screen iteration of Dracula to SYFY's own interpretation. Grab a loaf of garlic bread and happy hunting! 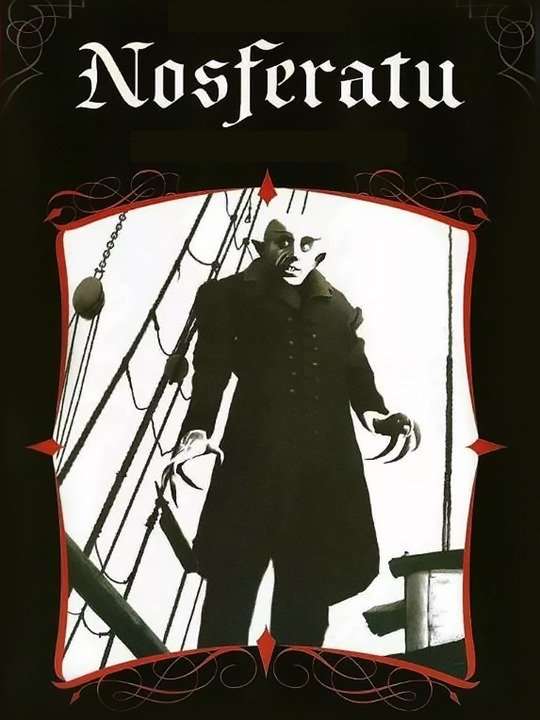 German silent film Nosferatu, directed by F.W. Murnau and starring Max Schrek, was an unauthorized adaptation of Bram Stoker’s Dracula. Count Dracula was renamed Count Orlok, and his looks are as gruesome as his feeding habits. Pale, bald, and fanged like a rodent, Count Orlok looks more like Dobby the House Elf’s evil cousin than the suave vampires of today. Count Orlok, the naked mole rat of Draculas, falls into many recognizable vampire tropes: he avoids sunlight, has powers such as telekinesis, and sustains himself on human blood. Although humans in this world are largely ignorant of vampires, there exists a convenient vampire handbook from which Ellen, the obligatory doomed female character, learns that she can use herself as bait to kill Count Orlock.

Tod Browning’s 1931 film Dracula was the first film adaptation of the eponymous novel featuring sound, and starred famed horror actor Bela Lugosi as the infamous Count. The vampire here is largely similar to that of Nosferatu, though Lugosi’s Dracula is more human-like in appearance and manner than Count Orlock. This adaptation is largely credited with staking Dracula’s claim to pop-culture fame. Here we also see a few familiar vampire rules: Dracula can turn into a bat, hypnotize and communicate telepathically, has no reflection, has vampire brides, and is not a fan of wolfsbane and crucifixes. The vampire hunter Van Helsing is also introduced to the big screen in this adaptation.

Francis Ford Coppola’s take on Dracula gifted us the Gary Oldman/Keanu Reeves/Winona Ryder love triangle we never knew we needed. Dracula gets a makeover for this one. He looks like, well, Gary Oldman by day and reverts to Emperor Palpatine with a powdered wig by night. These vampires also receive an upgrade in powers: not only can they transform into animals, hypnotize people, and read minds, but they can also live forever, travel as mist, and walk in daylight. Of course, they still have weaknesses: fire, puncturing of the heart, communion wafers, and being forced to listen to Keanu Reeves’s English accent.

With Buffy, we move our focus from Dracula to entire societies of vampires. The vampires of the Buffyverse are demonic spirits living in human corpses, but they can switch between convincing human appearances and monster forms. These demons are powerful, with heightened strength, senses, healing powers, immortality, and shapeshifting abilities. Most humans are oblivious to their existence (and that of other supernatural beings), but vampires can be identified by their lack of reflection, lower body temperature, lack of heartbeat, and overall creepiness. They also dislike garlic and, like any proper dinner guest, require an invite into the home. Slayers, chosen warriors such as Buffy, can kill them by decapitation, fire, sunlight, holy water, heart injury with a wooden object, or powerful explosives.

Blade’s titular character, based on a Marvel Comics superhero, is a half-human, half-vampire protagonist who hunts vampires because his mother was attacked by one. Vampires exist in a secret subsection of society, with hierarchies distinguishing between the superior “natural-born” and the socially inferior, human-turned vampires. All vampires are considered a separate biological species from humans, originating from a supernatural virus, and they are neither affected by holy objects nor do they have the ability to turn into bats. They look like humans with retractable fangs, have longer lifespans, superhuman strength, agility, senses, and healing powers, and their weaknesses include UV light, silver, garlic, and, strangely enough, the blood thinner EDTA.

In this legendary Disney Channel Original Movie, the vampire looks like your standard middle-aged bachelor with a pair of campy costume store fangs, and to most humans, the vampire is just Halloween lore. Vampires walk on walls, fly, live in coffins, and have no reflection, which is how our 8-year-old protagonist discovers that Dimitri, his mom’s date, is the supernatural kind of sketchy. Vampires can also place people under trances, and though the kids recruit vampire hunter Malachi Van Helsing to defeat Dimitri, it’s only their mother’s true love for the kids that can break her out of the trance and doom the vampire to a silver-sealed coffin.

Universal Pictures’ Van Helsing features a world with outright conflict between humans and supernatural beings, from Frankenstein's monster to werewolves to, you guessed it, vampires. These vampires originated from Dracula, who became the first vampire through a deal with the devil, and they can take either human form or winged, demonic form. They can fly, exhibit super speed, strength, levitation, and healing abilities, and Dracula in particular can transform himself and control other monsters. Vampire slayer Gabriel Van Helsing can kill common vampires with sunlight, holy objects, stakes, and silver. However, Dracula’s only weaknesses are his vulnerability to werewolves and his inability to foresee the hunter-becomes-the-monster plot twist.

The vampires of the Twilight film saga, based on Stephenie Meyer’s beloved book series, are pure glamour. They have harder-than-diamond, crystalline skin that sparkles in sunlight, predatorily gorgeous looks, superhuman strength, speed, and senses, regenerative healing, and a few special powers such as telepathy and foresight for fun. Humans are unaware of their existence until they stumble into a confusing, star-crossed romance with Robert Pattinson’s hair. Twilight vampires differ from others in that they do have reflections and do not need to be invited into the home. They don’t shapeshift (they feud with shapeshifters!), they live by their secret society’s own laws, and they have eyes like mood rings to indicate if they’re blood-thirsty newborns, “vegetarian” animal-eaters, or simply very hangry. To kill a vampire, one must tear them limb from limb and burn their body parts, which feels like the right level of dramatic for a walking disco-ball.

The CW’s The Vampire Diaries, based on L.J. Smith’s book series and followed by spin-off series The Originals and Legacies, introduces a new origin story and transformation method for its otherwise-typical vampire. The first vampires, called the Originals, were created by a witch’s spell. All other vampires are then created when a human dies shortly after consuming (or being injected with) vampire blood. That’s right: no neck-biting, no blood-sucking, no problem! After a refreshing drink of human blood, the new vampire is transformed and joins their sire’s bloodline. When an Original is killed, all members of their bloodline die with them. Vampires can have superhuman strength, speed, agility, durability, and senses, immortality, intensified emotions, and mind control. Weaknesses include sunlight, wood, werewolf venom, vervain, decapitation, desiccation, heart removal, and a potion called “the cure.” They are also highly flammable and should be kept away from open flames.

HBO’s True Blood gives us a world in which humans and vampires attempt to coexist in peace with the invention of synthetic blood allowing vampires to feed ethically. Vampires appear similar to humans, though paler and with blood for tears (so punk). They have enhanced strength, speed, perfect recall, healing, endurance, and can hypnotize people. Some can also fly, imitate voices, teleport, and perform telekinesis. Most vampires are susceptible to sunlight, silver, stakes, decapitation, blood loss, wooden weapons, sleep deprivation, and hepatitis. They are not harmed by holy items, they do have reflections, and they do need to be invited into the home. Vampires who bite and turn humans have a special relationship with their “progeny,” which can either be parental in nature or very questionably romantic.

Taika Waititi and Jemaine Clement’s mockumentary brings a human film crew into the flat of a few eccentric vampires preparing to attend the Unholy Masquerade, the event of the year for the undead. Pale, fanged, and mostly human-like in appearance (except Petyr, the decrepit Count Orlock of the crew), vampires can levitate, turn into animals, and hypnotize humans. Their weaknesses include sunlight and never getting past the bouncers at the cool nightclubs. Though there are vampire hunters out there, most humans seem oblivious to the supernatural, with the exception of human “familiars” who are enthralled by vampires and act as their eager, unpaid personal assistants as they await the chance to become vampires themselves. (The same rules apply, of course, for the award-winning FX series of the same name.)

The vampires of SYFY’s Van Helsing are similarly human-like, though more grotesque, with accelerated healing, endurance, speed, strength, increased senses, and longevity. They can be killed by decapitation, heart wounds, broken necks, brain damage, blood loss, UV rays, and a substance called “vampire control agent.” Long ago, vampires hid in the shadows, but the events of Van Helsing take place after The Rising, an apocalyptic event that resulted in ash covering the sun, allowing vampires to roam free. Like many vampire tales, this story includes an interpretation of Dracula: Olivia von Dracula, the first of all vampires. The Van Helsing of this story is Vanessa Van Helsing, whose blood turns vampires back into humans, and whose fight scenes put the other Van Helsings on the list to shame.