Be it the trolls who like to launch personal attacks on writers and artists simply because they didn't like a storyline, or that sad, pathetic coalition of so-called comics "fans" who unironically long for the days when Captain America wasn't such a SJW, there is a small but very loud faction of people out there who make me question whether to ever check out a comics hashtag.

But then I I pop in on Dan Slott's feed, where he's sharing late-night ideas for a Superman story. Or I come across Gail Simone, the unverified Queen of Comics Twitter who absolutely revels in her love of all things Geek, with Cyclops and Gambit being the notable exceptions. Even when Gail is wrong, it feels right because her tweets come from affection and authenticity. (Sorry to break this to you, Gail, but it's Ace, Paul, Gene, and Peter in the original KISS lineup rankings). They both help remind me that social media gives us such a rare opportunity to connect with the creators of our favorite comics.

I'm an OG comics fan who misses the simplicity of days when you got just about all your comics industry news from the Comics Buyer's Guide. But CBG probably wouldn't have let me know that Tom King wonders just as much as the rest of us why Marvel hasn't given Sal Buscema and J.M. DeMatteis' legendary run on Spectacular Spider-Man the omnibus treatment (seriously, Marvel. Do you hate money??). There's an intimacy that social media provides that no print magazine can, because there is no middle man. Comics pros aren't hiring agencies to run their Facebook, Twitter, and Instagram accounts. When Lee Bermejo posts an image of his rabidly-cool rendition of Wolverine, you can bet Lee posted it, not some rando social media assistant.

But I digress, let me get to the reason I decided to write about comics and social media in the first place: a typically-understated post by one of comics' most understated geniuses, Walt Simonson. He recently posted on his official Facebook page a genuine piece of comic book history, the original artwork to arguably the single most famous image in his incredible career: the cover to Thor #337.

That is, of course, the debut issue in his now-legendary run on the God of Thunder's title, which introduced us to the awesome Beta Ray Bill. I've talked with Simonson before about the impact of his years-long time chronicling his tales of Asgard, and we've talked about his creative process too, but this post was different. For one thing, we're getting to see the actual artwork as he tells us in detail how the comics sausage is made.

Simonson clarified in his post that this is the original production version of Thor #337 –– which means its the photostat that was sent to the printer to actually print the published cover to the comic. Simonson wrote that the original drawing he did of Bill was photostatted and reduced in size to make it fit with the logo a bit better. (Simonson also still has the actual original art of Beta Ray Bill used for the cover. It was reprinted in IDW's excellent Walt Simonson's Thor Artist's Edition a few years back.) 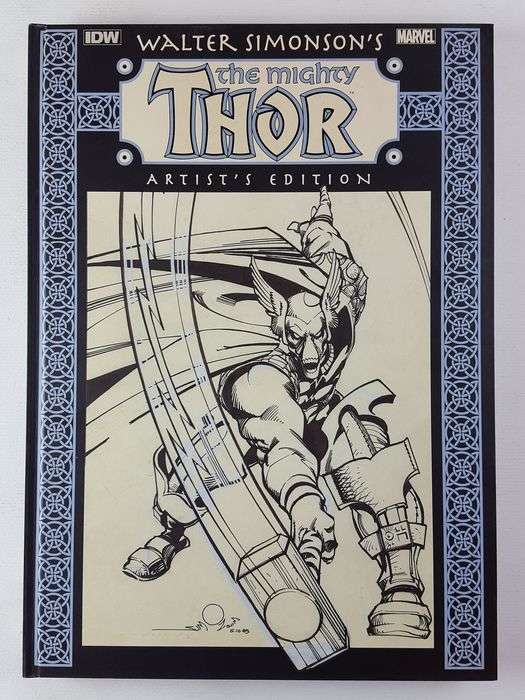 I know from reading the comments on our Artist's Alley video series that art nerds love to know what tools their favorite artist uses. Simonson shared that in the post too, even though he drew it nearly 40 years ago: pen (probably Rapidographs), ink, tracing paper, Scotch magic tape, white out, and masking tape!

I'm certain other fans probably knew this, but I had not realized that the Thor logo that appears at the top of the cover was, at that point in 1983, the only Marvel logo that had never been changed since its introduction back in the mid-1960s. As Simonson described it, having Bill smash the logo was his creative way of letting the readers know that something different was coming. A redesigned logo appeared the very next issue.

He then explained the decidedly low-tech way he went about creating the smashed logo design:

"I got a xerox/stat of the logo, cut it up, moved the pieces around on tracing paper over the figure till I got them where I wanted them, and then taped everything down on the overlay. I did some additional drawing and some whiting out on the tracing paper as well. So even though the figure here of Bill is a stat, this is the original cover, as photographed, that was printed on the comic book."

Simonson ended the post with a thank you to Mike Carlin, the one-time Marvel editor. It turns out Carlin made sure Simonson received the production stat and overlay used to make the cover, something that even in the '80s wasn't an automatic thing. It was as if Carlin could sense that this issue of Thor marked the start of something bold and new, and this piece of production art should be preserved. Nice work, Mr. Carlin.

What other industry can you get this kind of up close and personal look at the behind the scenes process, with a comics great giving you the breakdown of how he created one of the most memorable superhero images of the Bronze Age. Sure, Simonson does convention appearances and he might do a panel where he discusses this, but its very likely he won't have the actual cover art there with him. Social media gives him a platform to provide us the chance to see the white-out on the page and the yellowed scotch tape used to keep separate letters in the title in place, proving the artwork's vintage. It's actually incredible, when you consider that up until the 1960s, most comic art was destroyed after printing because it was considered worthless.

Those of us who like to see comic art in its original black and white form are lucky that Simonson has held on to almost all of his original art pages over his long and illustrious career, something we talked about several years ago at San Diego Comic-Con. We are just as fortunate to have platforms that allow creators like him to share their work, and their creative vision –– in so many ways that didn't really seem possible before. Attention, artists and writers: More of this, please!

Of course, sometimes, comics talk on Facebook and Twitter really sucks. But don't let the loud voices fool you.

A lot of the time, it can also be truly amazing.

Let's talk comics! Find me on Twitter/Instagram and let me know what's on your pull list.

It's a fan thing
Join SYFY Insider to get access to exclusive videos and interviews, breaking news, sweepstakes, and more!
Sign Up for Free
All Posts About
Comics
Features
Behind the Panel
Beta Ray Bill
Thor
Walt Simonson
marvel comics
opinion
Related Stories

Behind the Panel with comic book legends Walt and Louise Simonson

Jon Kasdan and the 'Willow' cast explain the premiere

'The Mean One' trailer unleashes a gruesome new Grinch