When Neil Gaiman's Sandman series kicked off in 1989 under DC’s newly formed Vertigo line with editor Karen Berger, it was unlikely that anyone could have known the profound effect it would have on bringing new readers to comics. Gaiman’s tendency to have one foot in literature and one in mythology brought a crowd of hybrid readers to mainstream comics. A lot of people got into comics through the Sandman, and the series now enjoys a status as a must-read.

However, when Gaiman’s Sandman wrapped, we were left with dozens of characters and a limitless universe to explore that went on in titles like The Dreaming and Lucifer. Many creators have gone on to create new worlds through the Sandman mythology. Regardless of which creative team you’re reading, the universe is well-known for bringing the quality.

Yet, the specific series that brings us here today is Nalo Hopkinson's more recent House of Whispers. Like Gaiman, Hopkinson is a lifelong devourer of literature, and this perspective has given readers one of the most revitalizing titles to come out of the Sandman mythos in years.

Across (the Sandman) Universe

Though the Sandman series was well-known for bringing in folktales and myths from a wide variety of different cultures, House of Whispers builds specifically on the tales of African gods. Set in New Orleans, this story divides its attention between a group of imperiled gods and three sisters who get tied up in these affairs of the supernatural. While House of Whispers is rooted soundly in Sandman history — with ongoing appearances from Cain, Abel, and their gargoyle Goldie — it segues and creates a whole new cast to work with, in a way that could easily be detached from the initial premise to operate on its own merits. By taking the initial concepts and working them into a whole new kind of story, House of Whispers holds true to the spirit of the Sandman Universe while becoming something all its own.

Author Nalo Hopkinson is best known for her novels like Midnight Robber and the Salt Roads, which offered an early look at the mix of history, horror, fantasy, and powerful emotional grounding that we also encounter in House of Whispers. The premise behind all the current Sandman Universe stories is that the God of Dreams has abandoned the Dreaming and left its denizens to fend for themselves. This has produced many fascinating spin-offs, but House of Whispers is perhaps the story that most tonally matches much of the heyday of the original series, which featured a lonely, dying God, trying desperately to make amends and settle his affairs before his inevitable end.

The Sandman has always been about the interweaving of different mythologies into a nebulous core, and no book yet has done that quite so effortlessly as House of Whispers. 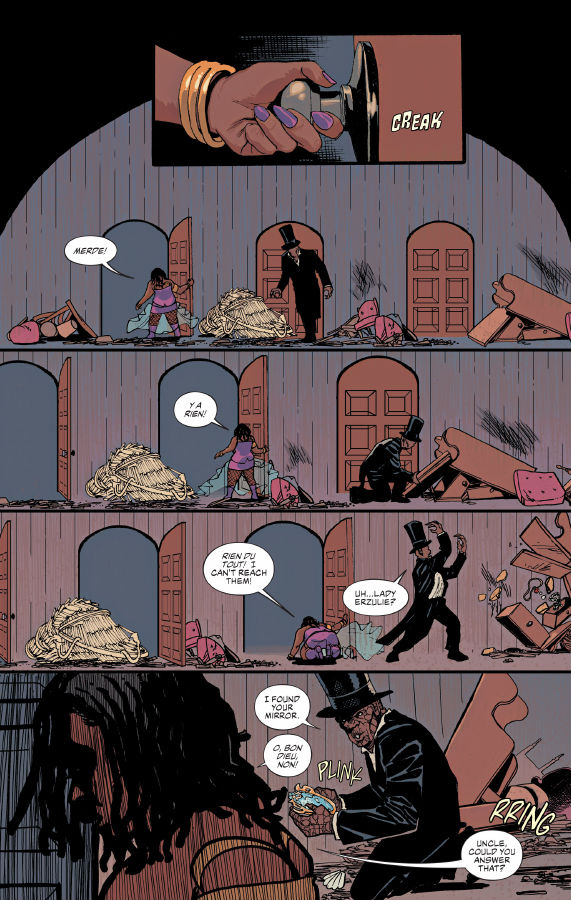 So What’s It About?

This story begins with a game of telephone. A seemingly innocuous misunderstanding leads a young woman to die, but she gains the power to bring death to others simply by touching them. Meanwhile, the Dreaming begins to struggle. Abandoned by its king, its citizens scramble to hold the amorphous realm together. While that's going on, the realm of the dream god Erzulie Freda also hits turbulence. Freda is the keeper of the realm that Voodoo worshipers visit when they sleep, and her happy houseboat is lost to her as she is plunged into the river and lost in the Dreaming. These catastrophes are all interconnected, and these characters must work together to save themselves. Much as the original series utilized real-world unexplained ailments such as “sleepy sickness,” Hopkinson offers a supernatural explanation for Cotard’s Delusion, in which people believe that they are dead while they seem perfectly fine.

This all leads us through powerful metaphysical realms while opening up a new world of characters, such as the bizarre Uncle Monday — an alligator god who, much like his avatar, borders between being terrifying and beautiful, and the outspoken human child who seems to know more about what’s happening than anyone realizes.

The creative team on this book has knocked every issue out of the park. Not only does Hopkinson’s writing give us new characters and ideas to toy with, but the gorgeous covers by Sean Andrew Murray do nothing but enhance the fluid and expressive interior art of Dominike Stanton. The purple, blue, brown, and gold color themes John Rauch brings to the table create a tone to the pages that set them apart from the general look of most other Sandman books. The lettering by Deron Bennett interweaves the panels together in a way that makes what could easily become unwieldy blocks of text into flowing prose. This is a team of people that are able to see eye-to-eye in their own individual duties in a way that makes the finished pages nothing short of comic book perfection.

In the end, every single book that comes out of the Sandman Universe is good. From Sandman #1 through The Dreaming and into our modern age, the mark of quality that these stories bear is consistent. This is a franchise that has remained compelling through countless creative teams, and there is certainly something to be said for that. Yet, if you’re looking for something that adds a little bit of fun and mystery, a lot of queer and Black representation, and some bonkers new gods thrown into the mix, House of Whispers has been one of the most underrated books of the last year, and it more than deserves to be added to your pull list. 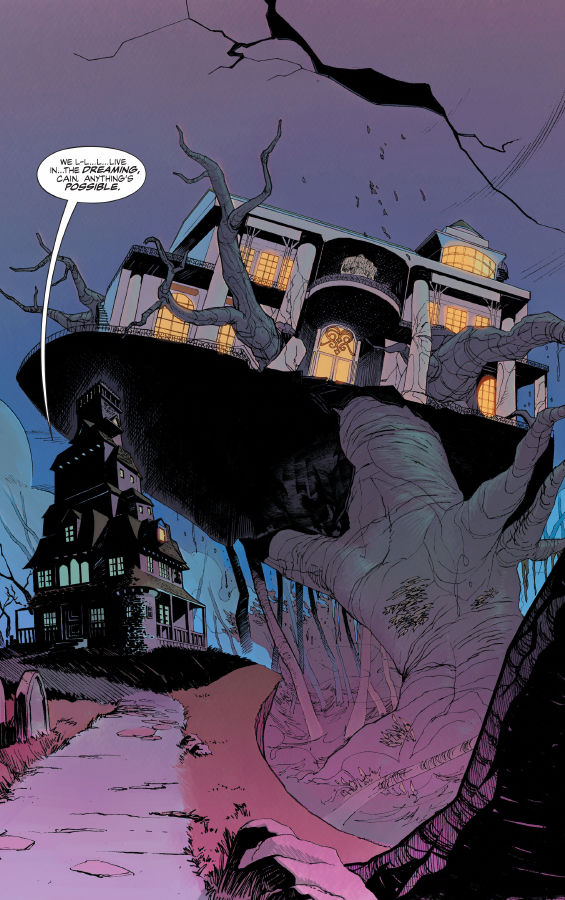 It's a fan thing
Join SYFY Insider to get access to exclusive videos and interviews, breaking news, sweepstakes, and more!
Sign Up for Free
All Posts About
Comics
Fangrrls
House of Whispers
Nalo Hopkinson
The Sandman
You May Also Like
Recommended by Zergnet
Latest on SYFY WIRE