Phil Coulson & Co. are on an Endgame-y time-travel mission to the past in the first teaser trailer for Agents of S.H.I.E.L.D.'s seventh and final season on ABC.

In an added twist, we learn that in order to save S.H.I.E.L.D., our heroes must also save HYDRA. Well, it's not so much a twist, because as we learned in Captain America: The Winter Soldier, the two organizations became so intertwined it was very hard to tell where one began and the other ended. Due to their symbiotic (and borderline parasitic) relationship, it stands to reason that if one of them goes, so does the other.

Take a look at the teaser below:

They need to change the past to rescue the future. The final season of Marvel's #AgentsofSHIELD premieres Wednesday, May 27. https://t.co/ONDSVtNDB3

In addition to the usual cast members, Season 7 will also feature a crossover with Agent Carter (which only ran for two seasons) by bringing back Agent Daniel Sousa (Enver Gjokaj).

“We get to see [Sousa] in a different light," co-showrunner Jeff Bell recently told Entertainment Weekly. "[Sousa] had a particular role on [Agent Carter], and so we were able to show another color of him that you hadn't necessarily seen on the show."

Prepare for an attack from the Fire Nation. All three seasons of Nickelodeon's Avatar: The Last Airbender are coming back to Netflix Friday, May 15, the company announced this week. It's about time, as the streamer is currently working on a live-action interpretation of the original program.

Running for a total of 61 episodes between 2005 and 2008, the series was created by Michael Dante DiMartino and Bryan Konietzko. Animated in the style of Japanese anime, it became a cultural icon thanks to a steady incline of solid worldbuilding and surprisingly complex characters. It's all been pretty hard to stream in its entirety up until now. 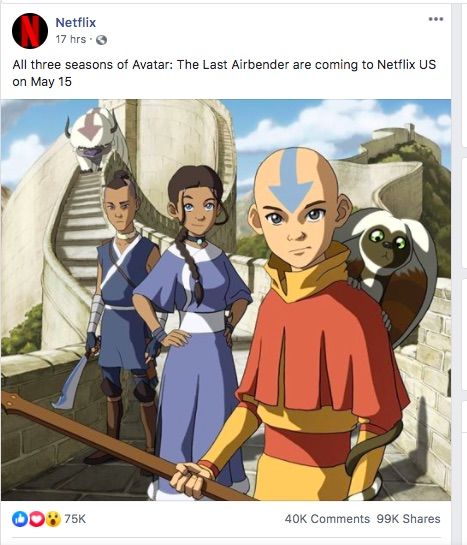 Last Airbender takes place in a fictional land where humans have learned to harness the four basic elements: air, fire, water, and earth. The Fire Nation rules every tribe with an iron fist, which prompts the return of a prophesied being who will master all four elements and bring about peace.

The show led to a sequel series, The Legend of Korra, which ran for 52 episodes across four seasons.

All right, let's get straight to the biscuits. A Danger 5 podcast series is coming by way of Audible this coming Monday (April 27).

In terms of plot, the story is chock-full of bizarre hijinks and absurdist humor. Across eight episodes the titular team will fight a "a host of evildoers hell bent on world domination" as they "embark on a treasure hunt in the Bermuda Triangle, get cool and sexy at Dracula’s beach party, succumb to the dark secrets of the Congo jungle, go on legendary labors in the Greek islands, fall victim to bargain prices in a hellish Australian death-trap, go on the trail of a city squashing giant pussycat and get haunted by nightmares and nibbles in the spooky halls of Danger Manor," reads the synopsis.

While it technically takes place during World War II, the first season of the TV series is presented as a super-schlocky spy-fi television program from the 1960s.

It centers on an international group of secret agents tasked with thwarting Nazi plans (which involve stop-motion dinosaurs, giant mecha robots, and the theft of famous landmarks) and, of course, killing Adolf Hitler (played by Russo's father, Carmine).

The show's second season is made to resemble films and tropes from the 1980s.

All Posts About
News
TV
Avatar: The Last Airbender
Danger 5
Marvel's Agents of S.H.I.E.L.D.
Netflix
Trailers
WIRE Buzz
You May Also Like
Recommended by Zergnet
Latest on SYFY WIRE