DC's Boy Wonder is getting an all-new ongoing comic book series this spring from writer Joshua Williamson (The Flash, Future State: Justice League) and artist Gleb Melnikov (Wonder Woman, Batman/Superman Annual). The Robin title will focus on the Damian Wayne version of the character as the young hero attempts to prove himself as the greatest fighter in the DC Universe by taking part in the deadly League of Lazarus tournament. But first, he needs to locate the secret island on which the tournament is being held. The release promises "a new supporting cast, brand new characters, and fights, lots of fights!"

Readers can get psyched for the new book with a two-part "Demon or Detective" prequel arc set within the pages of Batman #106 (out Tuesday, March 2) and Detective Comics #1034 (out Tuesday, March 23). The precursor storyline follows Damian as he leaves Batman behind and comes face-to-face with his mother, Talia al Ghul.

"Being a big fan of Damian Wayne, I'm really excited about getting him back on a hero's journey," Williamson said in a statement. "Gleb is the perfect artist to tell this story as we show readers Damian's growth, in a new adventure that navigates his legacy, his connections to Batman, Talia Al Ghul, and kicks off an important story in the DC Universe.”

In terms of covers, you've got a main and wraparound from Melnikov; a team-themed card stock variant cover by Andy Kubert; and a 1 in 25 variant cover by Riccardo Federici. The debut issue goes on sale Tuesday, April 27.

It may take some time for Doreen Green (aka Squirrel Girl) to make her grand entrance into the MCU, so for now, we'll just have to settle for Flora & Ulysses. Premiering on Disney+ next month, the quirky superhero flick — which revolves around a daring squirrel named Ulysses — has unveiled its charming first trailer unto the world.

Newcomer Matilda Lawler plays Flora, a 10-year-old comic book fan with a cynical outlook on life following her parents' recent separation. Upon rescuing a squirrel with a special abilities, the young heroine is swept up into a grand adventure that ends up changing her entire worldview. Thanks to Disney's ownership of Marvel, the trailer begins with a look at established heroes like Captain Marvel and Black Panther.

Directed by Lena Khan (The Tiger Hunter), the film is based on Kate DiCamillo's Newbery-winning book of the same name and co-stars Allyson Hannigan (How I Met Your Mother) as Flora's mother and Danny Pudi (Community) as a dastardly animal control worker.Ben Schwartz, Anna Deavere Smith,  Benjamin Evans Ainsworth, Janeane Garofolo, and Kate McCucci round out the rest of the cast.

The project was first announced in the summer of 2019, with production kicking off in Vancouver two weeks later. Flora & Ulysses arrives on Disney+ Friday, Feb. 19.

He'll also write the pilot episode of the hour-long drama, which is being produced by No Equal Entertainment and Frantic Films. Mallozzi and McClellan are executive producing alongside No Equal president J.B. Sugar and Frantic CEO Jamie Brown. "I’m beyond excited to be working with J.B. Sugar and Frantic Films in bringing to life a series adaptation of Brian McClellan’s masterful tale of gunpowder and wizardry," Mallozzi said in a statement to Deadline.

“What struck me about talking with J.B. and Joe wasn’t just their professionalism, but their fandom," added McClellan. "They love the books, and that’s the biggest compliment an author can get. I’m absolutely thrilled that such a talented group will work to adapt Powder Mage to TV. I’m a huge admirer of Joe’s work, and I can’t wait to see what he does to bring this series to life.” 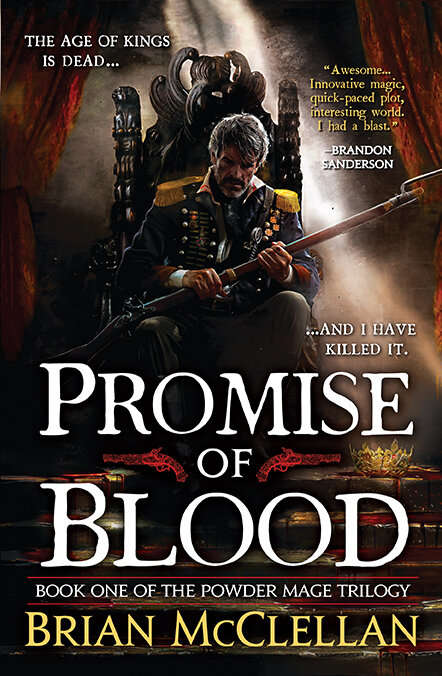 Published between 2013 and 2015, the Powder Mage trilogy (comprising Promise of Blood, The Crimson Campaign, and The Autumn Republic) takes place in the fictional Nine Nations, a "world in which magic collides with 18th century technology against the backdrop of political and social revolution," writes Deadline. "At the heart of the story are Powder Mages, unique individuals who gain magical abilities from common gunpowder."

The books are a prime example of "Flintlock Fantasy," a burgeoning speculative sub-genre in literature that derives fantasy and sci-fi scenarios from technology developed at the start of the Industrial Revolution in the late 18th century. Some consider it a cousin of steampunk, which generally takes place in the late 19th/early 20th centuries.

“I’m delighted to be working with No Equal and Joseph Mallozzi to bring Brian McClellan’s wonderful epic fantasy novels to a television audience. These acclaimed stories are packed with action and compelling characters embedded in the fascinating and emerging genre of Flintlock Fantasy. We can’t wait to adapt them for the small screen,” said Brown.

It's a fan thing
Join SYFY Insider to get access to exclusive videos and interviews, breaking news, sweepstakes, and more!
Sign Up for Free
All Posts About
Comics
Movies
News
TV
DC Comics
Disney+
Flora & Ulysses
Powder Mage
Robin
WIRE Buzz
You May Also Like
Recommended by Zergnet
Latest on SYFY WIRE