If you're a gender minority, making your way onto a best-of list can help bring attention to your work that you might not otherwise get. As much as things might be changing in publishing and comics, they are still fields dominated by cisgender men, particularly heterosexual white men, so making that best-of list can help you find your audience and solidify your career.

When you’re nonbinary, though, you have to ask: At what cost?

Why? Because so many of the best of lists that try to bring attention to gender minorities focus exclusively on women or femmes, both of which are problematic for nonbinary folks who identify as neither. (Some nonbinary people identify as one or both, which is totally cool.)

Despite the intentions of list creators, being put on a list for women as a nonbinary person can be jarring and hurtful and erases the reality of nonbinary identities. So, we created this list to highlight the nonbinary writers and comic creators who are changing science fiction and fantasy from the inside out.

01. Rivers Solomon (An Unkindness of Ghosts, The Deep)

In their debut novel An Unkindness of Ghosts, Rivers Solomon (they/them) explores race, gender, sexuality, and the human condition on a generation ship in outer space. Solomon has been open about living in a body that doesn't conscribe to heteronormative culture and is deeply committed to creating worlds rich with racial, sexual, gender, and genital multiplicity. In 2019, their book The Deep was released. The novella tells the story of queer AF, nonbinary AF mermaids who are descendants of pregnant African women murdered by slave traders and dumped in the Atlantic.

Vita Ayala (they/them) has written for several cool comics titles, including Supergirl, Morbius: The Living Vampire, Xena: Warrior Princess, and many more. In fact, their Xena run is nothing short of iconic, groundbreaking, and queer-affirming. (There are smooches between Xena and Gabrielle! Canonical SMOOCHES!) Their other work includes The Wilds and Submerged, both of which have been praised for their representations of Black, Brown, trans, nonbinary, and queer people (including people who are all of the above). Ayala often utilizes their platform to uplift other Black and Brown LGBTQ+ comic creators.

Sarah Gailey (they/them) first gained notoriety for their alternate history novella duology, River of Teeth and Taste of Marrow. Racking up a number of nominations for those works, Gailey won a Hugo in 2018 for their writing that appeared in low- and no-paying publications such as zines. If you didn't read their 2019 novel Magic for Liars, you are in for quite a treat — a noir urban fantasy, the novel also tells a great story about the power of siblings. They've also just released Upright Women Wanted, a wonderful novella about queer librarian spies that puts a new spin on the pulp Western.

I first found Blue Delliquanti (they/them) when I was writing an article about depictions of LGBTQ+ parents in science fiction and fantasy. I immediately fell in love with their robot-science-fiction-love-and-chosen-family story and devoured the existing pages of the still-running webcomic O Human Star, which has been collected into two volumes. Their vivid story explores gender, sexuality, and family in a post-AI world, bringing tender and painful conversations about love, sex, and relationships to life. Delliquanti is also the co-creator of Meal and The 'Stan.

Neon Yang (they/them) writes short science fiction and fantasy and is currently at work on a book-length project. Yang’s Tensorate series earned multiple award nominations, including for the Hugos and Nebulas. The four novellas in the series blend science fiction and fantasy elements to tell a complex tale about power and identity and two of the novellas utilize experimental storytelling that pays off. Yang describes their work as exploring the use of the human body and how it becomes a vessel for telling stories. With a background as a molecular biologist, Yang brings an innovative lens to their writing.

06. Hazel Newlevant (No Ivy League, Sugar Town, If This Be Sin)

Hazel Newlevant (they/them) is a comics illustrator and cartoonist who has edited collections such as Puerto Rico Strong and has won several awards including the Ignatz and the Eisner for their comics work. Their graphic memoir No Ivy League explores identity, gender, and what it’s like to be an anxious kid in a new environment through their experience working on a forestry crew one summer. Their novella Sugar Town is a tender bisexual and polyamorous love story and should be considered required queer reading.

07. Kacen Callender (Queen of the Conquered, Felix Ever After, Hurricane Child)

Kacen Callender (they/he) writes fiction for adults, young adults, and middle-grade audiences. Their adult novel Queen of the Conquered follows hero Sigourney Rose, a deposed heir to a kingdom. Using her supernatural gift to manipulate other’s minds, Rose plans to take back her throne from the colonizers who have destroyed her life. Callender tackles race, class, and what it means to be alive in this carefully wrought tale of revenge, the opening volume of the series Islands of Blood and Storm.

08. Ben Kahn (Gryffen: Galaxy’s Most Wanted, Heavenly Blues, Once Upon a Time Machine)

Discovering the work of Ben Kahn (they/them) was one of the happiest moments of my life as a reader. Kahn's work tackles important and sometimes heavy topics with humor and the punchy kind of writing that just makes you want to jump up in the air. Their latest comic, Gryffen: Galaxy’s Most Wanted, is a genderqueer anti-fascist space opera about a character who is so pissed off they can’t even. (Relatable.) Heavenly Blues follows dead thieves who’ve been sent to hell as they team up for a heist. The target? Oh, nothing big. Just heaven. 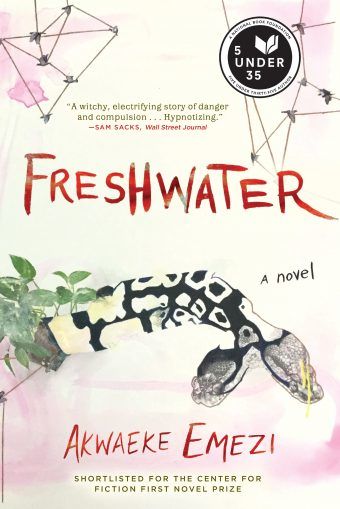 In their debut adult novel, Akwaeke Emezi (they/them) blends fantasy with literary fiction in the story of a person inhabited by parasitic gods. In Freshwater, they use magical realism elements to explore the real-world experience of living with a mental illness. Their debut YA novel Pet tells the story of a girl and her BFF, a mythical being brought to life with a drop of her blood. They are also a video artist and their next adult novel, The Death of Vivek Oji, will be released in late Summer 2020.

Taneka Stotts is an award-winning creator of comics who received an Ignatz and an Eisner for editing ELEMENTS: Fire, a comic anthology by creators of color. Stotts has also created numerous webcomics including Déjà Brew and Casual Hex. Déjà Brew follows an expelled witch who works with coffee and tea (hence the "brew") as he meets and helps a person with someone else's memories. Stotts also works in animation with writing credits from Steven Universe Future and Craig of the Creek.

Best known as the creator of Steven Universe, Rebecca Sugar (she/they) has solidified their place as a nonbinary hero through their animation work, having also made a huge impact on Adventure Time. Sugar makes this list, though, for her exceptional children's book The Tale of Steven, which retells the events of Season 5's "Change Your Mind," exploring Steven's gender identity and how those around him refused to believe him. It's a trans self-love story for adults and children. Sugar has been dedicated to bringing LGBTQ+ representation to audiences of families and children to help young LGBTQ+ folks grow up without shame in who they are.

12. Jeannette Ng (Under the Pendulum Sun)

Ng also made time in her speech to salute the protestors in her birth city of Hong Kong, saying, "Right now, in the most cyberpunk in the city in the world, protesters struggle with the masked, anonymous stormtroopers of an autocratic Empire. They have literally just held her largest illegal gathering in their history. As we speak they are calling for a horological revolution in our time. They have held laser pointers to the skies and tried to impossibly set alight the stars. I cannot help be proud of them, to cry for them, and to lament their pain."

Ng took her moment of privilege as an award winner with a platform and used it to speak truth.