In these far from sunny days, who better to cheer us up than Olaf?

Disney Animation has announced that everyone's favorite wisecracking snowman, voiced by Josh Gad from its blockbuster toon Frozen and last year's sequel Frozen II, is getting his own digital series on YouTube called At Home With Olaf.

To celebrate the news, the Mouse House also released a funny teaser titled Fun With Snow showing Olaf having some fun throwing a snowgie around.

Hyrum Osmond, Disney's chief animator for the adorable character, is creating the series of shorts from his home, where he's currently holed up in quarantine like the rest of us due to the coronavirus pandemic.

No word exactly what the shorts will be about, but no doubt they'll be a nice distraction. And Gad agreed, tweeting that he's recording dialogue for Olaf from his residence, and hopes it "provides a smile during these scary times."

My friends @alittlejelee & @mrhyrum called me up one day & asked me if I would be able 2 record some dialogue & sounds as Olaf from home. These little shorts done from home by Hyrum & the @DisneyAnimation team are so charming & hopefully provide a smile during these scary times🙏 https://t.co/pjdVGSDa2U

Our hearts are melting already. 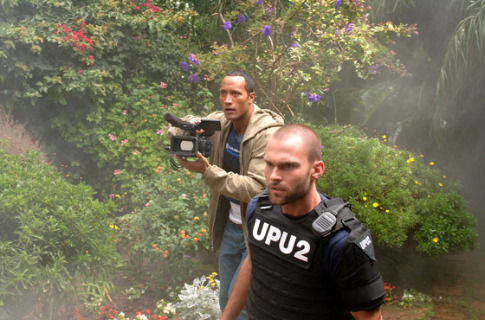 Some good news for fans of cult filmmaker Richard Kelly: The Donnie Darko director has announced that he's moving ahead with plans to make a prequel to his 2006 sci-fi comedy thriller Southland Tales, which will purportedly feature both live action and animation and round out an epic tale he's been envisioning for years.

The post-apocalyptic flick, which starred Dwayne Johnson, Seann William Scott, Sarah Michelle Gellar, and Justin Timberlake, bombed with audiences and critics alike when it premiered in competition at the Cannes Film Festival and clocked in at 160 minutes. Kelly ended up doing some major retooling of his sophomore effort in the editing room before it hit theaters. Alas, the 144-minute official release of Southland Tales wasn't received any better, and sent Kelly to the proverbial Hollywood jail, banished into obscurity.

But yesterday Kelly told his followers in a lengthy Twitter thread that's nearly as long as the film itself that not only has he finished up a 4K restoration of the original Cannes cut and theatrical version, but he has an "ambitious new script" that will tell the "bigger story" he always imagined. What is that, exactly?

According to Kelly, it's a "six-chapter saga" based on graphic novels he cowrote with Brett Weldelle, of which Southland Tales "covers the first three chapters."

We have completed 4K restorations of both the theatrical and Cannes versions. The 158 minute Cannes cut is rough with many unfinished visual effects. It *will* be released for posterity... but my focus has been on preparing the epic Version 3.0 of #SouthlandTales. #SouthlandNow

#SouthlandTales is a six-chapter saga. The existing film covers the second half. I wrote graphic novels with @brettweldele that cover the first three chapters. I have completed an ambitious new script that uses the novels as a blueprint for an ambitious new film. #SouthlandNow

Financing's another matter, though. While Kelly said he has the "script ready and assets secured," there's no official word yet whether a studio is aboard to back the project.

But our rabbit ears are up and we'll let you know if we hear anything.

Finally, Universal Pictures is craving more monster movie IP, which is presumably why it has picked up the film rights for a vampire novel by someone aptly named Wolff. Deadline is reporting that the studio has bought the film rights to Tracy Wolff’s upcoming YA vampire novel, Crave.

Described as a paranormal fantasy with a feminist perspective, Crave tells the story of a human girl who falls in love with a vampire prince named Jaxon Vega, and inadvertently winds up in the middle of a conflict between warring factions.

The book will be on sale beginning April 7 from Entangled Publishing.

Universal is apparently all about doing more monster movies after tasting blood sweet, sweet success with its co-production of The Invisible Man with Blumhouse. Not only has the studio signed James Wan up to make an upcoming monster movie, but it also renewed a first-look deal with Blumhouse in hopes of making a Dracula feature.

(NBC Universal and its parent company, Comcast, own both SYFY WIRE and Universal Pictures.)

'Evil' Elsa doll refuses to be thrown out, brings a Frozen chill to Houston family