We've made it through summer. When future generations look back on 2020 they will see that we survived by wearing masks, doom scrolling, and screaming into the void.

This month's books offer a bit of catharsis in these proverbially dark times. For those of you who can't seem to focus but want something to read, I offer you novellas by Stephen Graham Jones and S.L. Huang. If you're missing Geralt of Rivia, but not the earworm, have I got a Slavic gas-lamp fantasy for you.

Deadly magic schools, retellings, and space operas abound in this month's SFF roundup, so get ready and watch your TBR multiply! 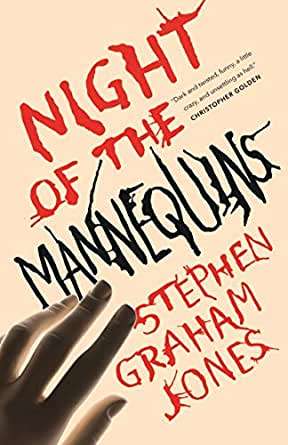 Stephen Graham Jones kicks off the month with Night of the Mannequins, a horror novella about a teen prank that goes very horribly wrong. I’ve heard nothing but glorious things about Graham Jones’ adult novel The Only Good Indians. Sawyer and his friends pull a harmless prank on Sawyer’s cousin Hanna who works at the movie theater. They pose a mannequin named Manny as a customer. Harmless, right?

WRONG. The story opens up with an admission that the prank has gone horribly wrong and now most of them are dead. This wasn’t a regular mannequin. Manny was one part of Sawyer’s crew, a toy they fished out of the river and dressed up as a friend, but he was discarded. Is Manny the one getting revenge, or is there something supernatural afoot? The suspense! Don’t miss this one.

Don’t strain too hard, but, imagine a future where citizenship is the same as debt and medical bills are outrageous. In Architects of Memory, Ash and her family were indentured workers for a mining corporation, trying to earn citizenship.

Now, Ash is chronically ill from the stuff they’ve been mining and she needs to keep it a secret or risk losing her citizenship. Luckily for Ash, a crew of salvagers takes her on as she continues to try and find a cure. Aboard the ship captained by enigmatic Kate Keller, Ash might really get everything she’s after. But when the crew salvages a genocidal weapon from a destroyed starship, they uncover a corporate conspiracy that threatens to turn Ash into a living weapon.

What if we can’t be heroes? Natalie Zina Walschots’ Hench follows an ordinary number-pusher who just happens to work for terrible people to pay the rent. Even criminals need office employees, and Anna fits the bill.

After an encounter with a “hero” leaves her badly injured, Anna loses her job. Broke but resourceful, she discovers that these would-be Heroes leave more destruction to regular people like her. The difference between heroes and villains? Well, it seems to be in the marketing. Anna works to expose the data. She might as well be a source for the Daily Bugle. Instead, she’s hired by one of the worst villains around, and as she rises in the ranks, Anna might just save the world from heroes.

This one is for fans of V.E. Schwab and those missing the monster hunting of The Witcher. In gas-lamp-era Prague, monsters are real and they’re prowling in the shadows. The only protection hapless citizens have are the lamplighters, a secret elite group of monster hunters.

Domek Myska specializes in fighting pijavica, a type of vampire. His only downtime is spent with the beautiful Lady Ora Fischer. When he uncovers a conspiracy among the pijavica that would unleash massive terror on the world he’s sworn to protect, Domek finds himself in a race against time to set things right.

If you’ve followed my recommendations for a few months, you know that I get very excited about fairy tale retellings. I especially love when they are done in settings and cultures outside the Western gaze. Red Riding Hood and other fairy tales are hinted at in S.L. Huang’s novella, Burning Roses. Rosa and Hou Yi the Archer become allies to stop the deadly sunbirds that are ravaging the countryside.

Another reason I’m excited to read this one is that it features heroines who are middle-aged women. They’ve gone through their journeys and are still finding new ones. They aren’t sidelined as mentors and they’re still fighting evil and being protectors.

New Naomi Novik! I was a huge fan of Novik’s last novel, Spinning Silver. In a departure from the high fantasy inspired by fairy tales, Novik introduces us to a contemporary fantasy world where magic is real and students enter a school to learn the deadly art.

I know what you’re thinking. But this isn’t Hogwarts.

A Deadly Education is set at Scholomance, a school for the magically gifted. Here, failure can lead to death. There is no wand-waving instructor or trips to quirky towns. There are no friends who save your neck. Scholomance is about surviving. When you enter the school, you stay there until you graduate, or die, whichever comes first. It’s a Hotel California situation.

Now, El has enrolled and she’s ready to unlock the school’s secrets with her dark magic.

It's a fan thing
Join SYFY Insider to get access to exclusive videos and interviews, breaking news, sweepstakes, and more!
Sign Up for Free
All Posts About
Fangrrls
Get Rec'd
books
lists
Related Stories

'Knock at the Cabin': What are critics saying?

'Pitch Black' and the science of night vision