Get Rec'd: Six YA SFF reads for a magical October

It's the most wonderful time of the year, and I'm not talking about Christmas. October has always been my number-one month because of ― you guessed it ― Halloween. I’m not even the kind of person that likes being scared. I'm actually a chicken when it comes to scary movies, but I watch them anyway. I live Halloween, magic, ghosts, and other things that go bump in the night 365 days a year. And when it comes to books, the most magical, the better. 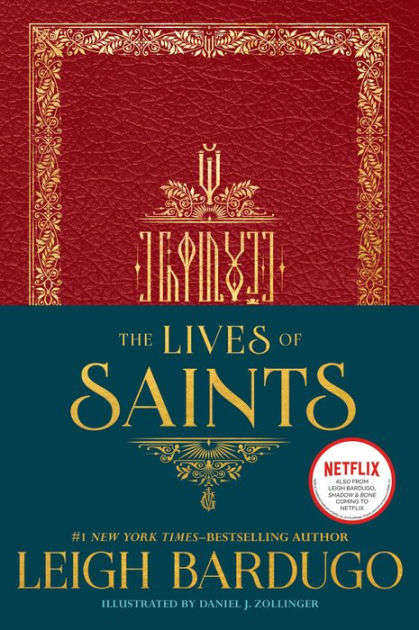 If you haven’t experienced the Grishaverse, stop everything you’re doing and go read Shadow & Bone by Leigh Bardugo. Consider it pre-game prep for the upcoming show coming to Netflix in 2021. The Lives of Saints is a small but important part of the Grisha world. In Shadow & Bone, the book is better known as Istorii Sankt’ya, and holds the stories of all the saints in Ravka, Kerch, Novyi Zem, and even a Fjerdan saint! This edition is a replica of the text used in the show! Each story includes a stunning work of art by award-winning artist Dan Zollinger.

You don’t have to be a Grisha expert to find something in this book. The stories read like fairy tales, accounts of miracles, and martyrdoms in a truly fantastical world.

Imagine a world cup, except instead of soccer players in tiny shorts, it's dragons! Welcome to the Blazewrath World Cup, a tournament where dragons and their riders compete in an international sports arena for all the glory. Each relay is more dangerous than the next, and all Lana has ever wanted to do is race. This alternate world looks a lot like ours, but the biggest change is that dragons and magic exist. When Lana is given the shot to represent Puerto Rico, she jumps at the chance. But this year, the Sire ― a legendary dragon who's cursed into human form ― is doing everything in his power to have the games canceled. And Lana is caught in the middle of it.

Ever since I read Forest of a Thousand Lanterns, I decided that Julie C. Dao was a one-click author for me. Her ability to make fairy tale stories feel real is *chef's kiss* perfect. Broken Wish follows 16-year-old Elva, a girl with a secret. She has visions and strange powers, which in her small village of Hanau, Germany, would make her the subject of a witch hunt. When she sees a vision of her future, she finds an enchanted mirror that leads her to the Witch of the North woods. Elva's understanding of heroes and villains is about to get shattered.

The Mirror series is a quartet of novels that follows this magical curse across centuries and family generations. The next installments will be written by Dhonielle Clayton, Jennifer Cervantes, and L. L. McKinney.

Do you even just steal a dragon from the emperor just so you can rescue your girlfriend? Well, that's what Maren does for true love in Shatter the Sky by Rebecca Kim Wells. Storm the Earth sequel spoilers may be up ahead!

After the events of Book 1, Maren and her girlfriend Kaia have a lot to work through. They’re not the same girls they were when they lived in their village. Maren has to deal with her dragon-touched abilities and doesn't know where to start when it comes to setting the dragons free. And now, as her friend is kidnapped, Maren has to return to the fray. Whispers of rebellion and destiny collide in the thrilling finale of this epic duology.

Among the Beasts and Briars - Ashley Poston (October 20)

It is said that in the Kingdom of Aloriya there are no droughts, disease, or famine, and peace is everlasting. Thanks to the first king’s bargain with the Lady who rules the forest, Aloriya prospers. Here, Cerys lives a safe life as the royal gardener's daughters. She has the power to make things grow with her blood. The day of her best friend's coronation, the peace is shattered and Cerys runs off to find the legendary Lady of the Wilds to help save Arwen.

Ashley Poston’s Among the Beast and Briars sounds perfect for fans of Tessa Gratton's Strange Grace and Naomi Novik’s Uprooted, especially if you love plucky heroines, shapeshifting foxes, and forests as dark as they are lovely.

This book high-key appeals to my paranormal-loving heart. Witches plus a quest for vengeance and a side of romance? Yes, please. In Kerri Maniscalco's Kingdom of the Wicked, twins Emilia and Vittoria are streghe (witches) who live secretly among humans. When Emilia finds Vittoria's body desecrated she will do everything possible to get the justice her sister deserves. Enter Wrath, one of the Wicked-princes of Hell. He claims to want to help her, that he's been instructed to solve the other murders of women on their island. But Emilia isn’t ready to trust anyone.

I am already obsessed with this and curious about what the other Wicked have in store.