High fantasy in comic books and graphic novels is enjoying a renaissance of creativity this year, with inspired talent jumping into the fray with imaginative vigor, and expanding the boundaries of epic storytelling.

Adding to the allure and evolution of the genre, a new two-issue miniseries from Image Comics titled The White Trees is charging into stores on Aug. 14, bolstered by the superstar creative team of Daredevil writer Chip Zdarsky and Runaways artists Kris Anka and colorist Matt Wilson — and SYFY WIRE has reined in an exclusive preview and comments from its commanding forces. 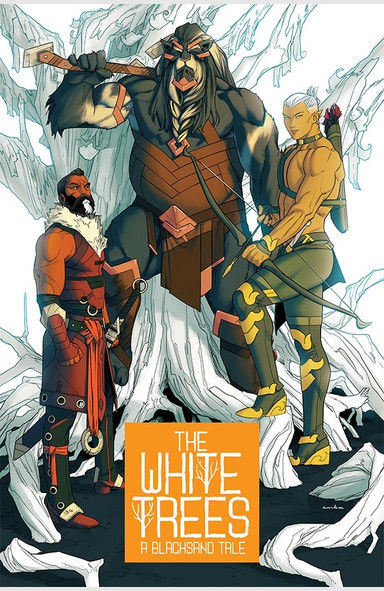 Two epic, oversized issues will introduce the fantastical world of Blacksand, a realm where lasting peace is hard-won, and a trio of unyielding warriors sport years of honorable battle scars to prove it. Nearly two decades after the initial war, our heroes' offspring are all missing, and it appears another brutal attack is looming on the horizon.

The captivating plot unfolds in leaps and bounds while wondering if these veteran fighters can eliminate their differences and put aside memories of past clashes for one final hurrah. Sir Krylos the Bold joins Sir Scotiar of Blacksand and Sir Dahvlan the Swift in an effort to rescue their children and quell the Trilonian drums of war incited by the vengeful General Targrand, before more lives are lost.

Zdarsky, the Eisner Award-winning writer and artist best known for his co-creation of Sex Criminals with Matt Fraction and leader of Marvel's current Daredevil run, believes this to be the creative team demonstrating their purest form.

“This book is Kris and Matt at their peak," Zdarsky tells SYFY WIRE." Every page is gorgeous and full of life and just good old-fashioned sexy fun."

"A book with everything: swords, angst, dragons, regret, and of course, daddies," Ank explains to SYFY WIRE.

Join the quest for honor and respect in our exclusive look at the premiere issue of Image Comics' The White Trees with a peek at the atmospheric cover for issue #2 in the full gallery below, then tell us if this fantasy adventure looks like an enticing epic that you'll be nabbing for yourself on on Aug. 14.

How 'Wakanda Forever' editor set up that secret cameo