Is a long-dead Sith sculptor the key to how Emperor Palpatine will make his grand return in Star Wars: The Rise of Skywalker? It's entirely possible. The character of Lord Momin, created for the Star Wars comics by Charles Soule, found a way to defeat death. He's also very, very particular about architecture and art. He's a Sith-powered snob, go figure.

The Sith are unable to return as force ghosts after their deaths, as has been confirmed by George Lucas multiple times. Once they're dead, they're dead... though some of them (Darth Maul) show an almost outright refusal to just die already. The Dark Side keeps them alive in other ways, and Emperor Sheev Palpatine (Ian McDiarmid) is a guy who had plans within plans within plans — he was fully aware that something could happen to him, and he was prepared. He probably didn't sleep very much, if at all. Sith life!

Palpatine prepared for death in many ways, with secret labs, Operation Cinder, and the Unknown Regions, but his penchant for collecting all kinds of Sith artifacts was also a part of his immortal scheme. When he took over the Jedi Temple and made it his personal residence, he scoured the archives and tripled his already large collection of ancient Sith trinkets. One of those trinkets is a mask, and this mask plays a major role in the last arc of the second run of Darth Vader comics. 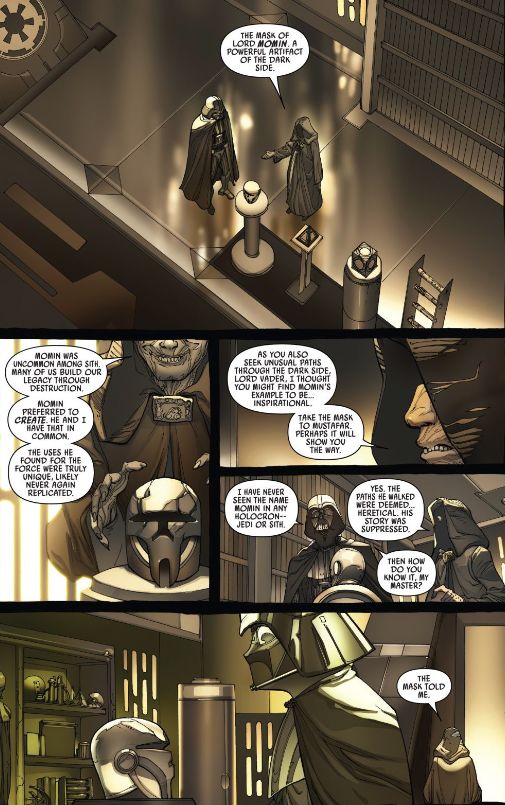 In the comics, Vader has gone to Mustafar to build his castle, which we see in all of its finished glory in Rogue One: A Star Wars Story. It turns out that building the perfect fortress of evil is not as easy as it looks. Before he ventures there, the Emperor gives him the mask of Lord Momin, an ancient Sith who was obsessed with art, architecture, and above all, himself. Sheev retrieves it from his constantly growing assembly of items from his newly converted Jedi Temple home, gives it to Vader, and sends Vader flying off to Mustafar on Queen Amidala's old Nubian royal starship, because Sheev just gotta be Sheev.

We see this in Darth Vader #21 (written by Charles Soule, art by Guiseppe Camuncoli, Daniele Orlandini, David Curiel), but it is in the following issue that we see Vader put the mask to ridiculous use. Vader is unhappy with the Imperial architect who is in charge of creating his castle, so he fires (kills) her. He whips out the mask, and through it, Vader sees the entire history of Lord Momin, somehow preserved within the artifact. It's not long before Momin's spirit tries to take over Vader himself... but Vader resists. 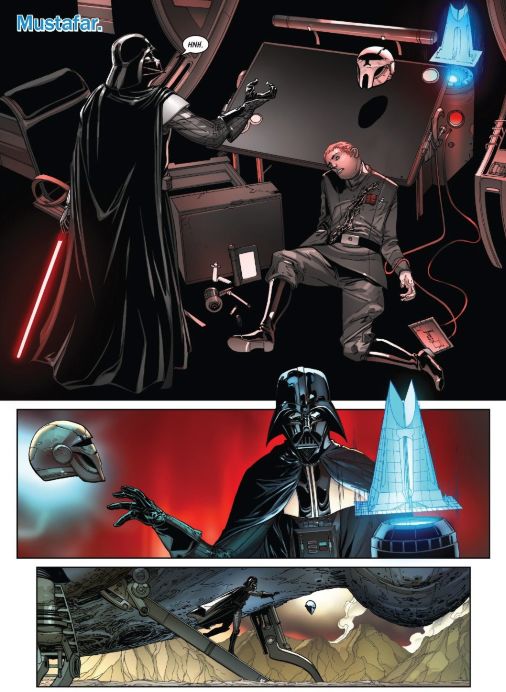 Instead, Vader places the mask on an unfortunate Mustafarian, and through the power of the mask, Lord Momin returns in this new host body. He promises Vader a wonderful castle, one that can even open a gateway into the Dark Side so that Vader can see Padme again. Vader has been sold this particular bill of goods before, but he goes along with it.

There are many attempts and many failures, with new castles rising and falling immediately. Momin has to continually upgrade to new host bodies, so a Stormtrooper and then an Imperial Officer both end up as his new host bodies as Vader's fixer-upper from hell continues to roll out.

It's only on the ninth attempt (a ninth castle, mind you, fully built), that the promised gateway (and nice chairs and such, we'd imagine) is up to code. Wouldn't you know it, though? Momin betrays Vader, and enters the working gateway into the Dark Side himself. Within, he meets his own spirit, hands over the mask, and Momin returns to life for real. 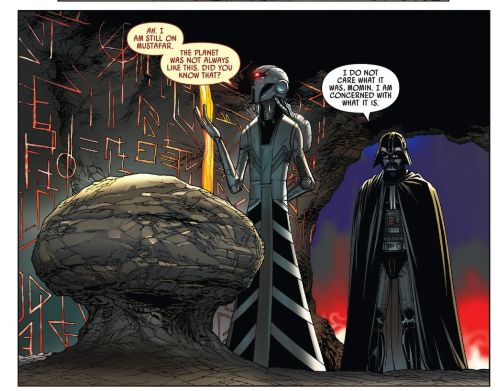 It's not long before Momin and Vader engage in a duel to the death, and though Momin does hand Vader his a** for a little bit of it, our choke-prone Dark Father emerges victorious. Momin is once again dead, Vader's castle is complete (with a dark side gateway that he uses to tragic effect), and Momin's mask is all but forgotten.

Forgotten by Vader, but not by everyone. Though the story of the mask is fully fleshed out in Darth Vader, we first saw the mask in the pages of the Lando miniseries, specifically in the fourth issue (written by Charles Soule, art by Alex Maleev and Paul Mounts). Though this series came out first, the events within it happen after the events we just described.

Lando Calrissian finds himself on a yacht owned by the Emperor himself, and yep, it is chock full of Sith relics and artifacts. One of the artifacts on display is, of course, Lord Momin's mask. Though it had been through the ringer on Mustafar, it is still able to corrupt two beings in the final parts of this series, and the only way for Lando to handle the situation is to blow up the yacht entirely, mask and all. 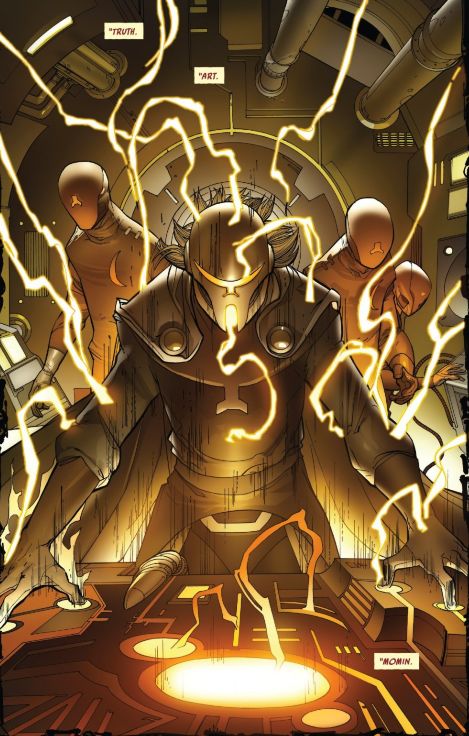 This, we think, is the end of Lord Momin's mask. Wonderful... but what does that have to do with The Rise of Skywalker? Plenty.

Thanks to the tale of Lord Momin and Vader never being happy with his fixer-upper, we know that the new canon fully involves Sith "spirits" being able to reside within artifacts. The films themselves, unlikely to rely on comics for such a huge plot point, touch on this "spiritual object" theme a bit when Rey first touches Anakin's lightsaber in Star Wars: The Force Awakens.

What other Sith-related item has been featured prominently in the sequel trilogy? The burned up mask of Darth Vader. That mask was created by the Emperor, and for all we know, he hid a little bit of himself within it… just to be safe. He could have hidden little pieces of his spirit all over the galaxy, including Vader's castle on Mustafar. Such a hot locale.

Between "Sith Troopers" being featured in early merchandising, painted red stripes on classic Star Destroyers in new posters, and that spikey, very Sith-tastic throne that we see in the final trailer for the film, it definitely seems that ol' Sheev has found a way to return…and he's bringing the classic OG Sith style along with him. Has he returned via mask, like Lord Momin once did? Is he using the mask to corrupt Kylo? Will he use it to corrupt Matt Smith's mystery character and then use him as a vessel if Smith actually ends up in the film, a status that seems to change daily?

We don't know of course, but the tale of Lord Momin may give us clues…as well as several warnings about quitting while you're ahead when it comes to castle design.

Star Wars: The Rise of Skywalker will arrive in our galaxy on December 20. We're not ready.