First Look: How Kang the Conqueror ditches 'tyrant Pokemon' vibe to find the 'iconic villain' underneath in new Marvel series

This summer, one of Marvel’s greatest unsung characters scores a deserved, complete origin story when the time-traveling supervillain enters a spotlight solo series in Kang The Conqueror — and SYFY WIRE has an exclusive chat with the writers and look inside the premiere issue.

Conceived by the dynamic creative duo of Stan Lee and Jack Kirby back in 1963, Kang was first seen that year in Fantastic Four #19 using the alias Rama-Tut, and then next in 1964 in The Avengers #8 under the name Kang. Now is a great time to get to know Kang, especially since he's poised to be the big bad in the upcoming MCU flick Ant-Man and the Wasp: Quantumania. 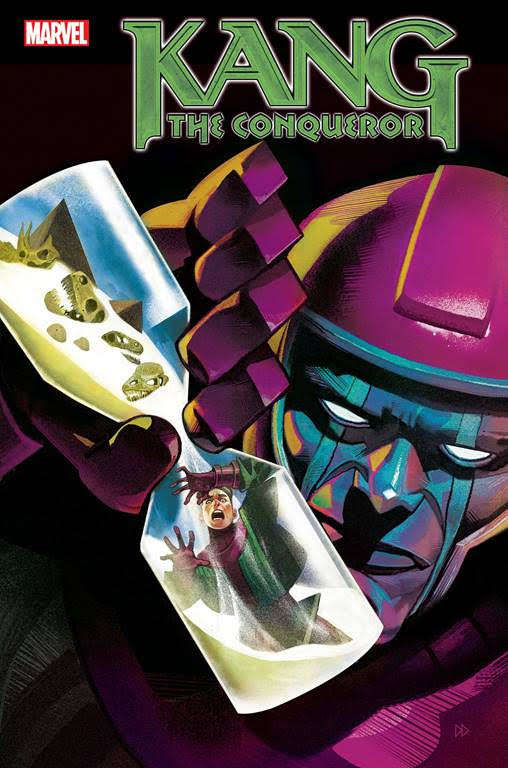 Inside this first-ever solo outing, the enigmatic Kang spans across the timeways trapped in an endless cycle of creation and destruction now revealed in its entirety. It's a cycle that starts and finishes with an aged, broken down Kang delivering his younger self down a perilous and dark path.

SYFY WIRE connected with Lanzing and Kelly to learn more about their hopes for bringing a tragic human dimension to Kang The Conqueror by telling his coming-of-age story to a fresh audience.

What were your goals in reintroducing Kang to a modern audience unfamiliar with the classic time-traveling villain?

JACKSON LANZING: Kang is a character steeped in time travel and wildly-contradictory lore. He’s had dozens of monikers and lives his life entirely outside linear time. So our goal could have easily been “make sense of this character’s story for a new audience.” But truthfully, our goals with Kang The Conqueror are deeply personal.

Collin and I are bonded by a very similar background; we were both young men passed between single mothers and complicated fathers who spent a lot of time trying to reckon with the difference between our volatile emotions and the men of character we wanted to grow into. We’d written a book at Vault comics called Zojaqan that was very much our tribute to our mothers - and we both found the experience very rewarding and cathartic. So we started to discuss writing a story about our complicated relationships with our fathers - and of all people, Kang The Conqueror kept coming up. Which was hilarious, because we’d never written at Marvel before!

COLLIN KELLY: Maybe because we were such enormous fans of Young Avengers, where young Nathaniel Richards first has to reckon with someday becoming the tyrant known as Kang - or maybe because we were just so intrigued by the relatable pathos of a man trying desperately to save himself from a glorious, but tragic and villainous, fate.

Every time we broke the story, this outlandish time-hopping despot became more and more human. He became relatable. We saw ourselves in his struggle against his worst instincts. And that’s when we knew this was a story we had to tell - not just for ourselves, but for this character we had grown to love, for all his terrible flaws. Fortunately, Marvel saw the same opportunity we did.

Why is Kang such an under-used character in the Marvel universe and what elements of his origins excite your storytelling instincts?

KELLY: For the same reason we’re so excited to bring his story to life: he’s complicated. A time-traveler who has criss-crossed his own time-stream more than even he knows, an agent of paradox who has used dozens of names, he’s easy to dismiss as a punch-line who shouts his own name like a tyrant Pokemon. Even though this is a man who ruled Ancient Egypt like a god, who conquered Jack Kirby’s war-torn Earth of 4,000 AD, who commands a legion that stretches to the furthest star, he rarely gets the respect he deserves.

And that is made worse by the fact that he fails. Often. Almost always, in fact. This is a boy from a utopic future, who literally had his throat slit by schoolyard bullies. The deck has always been stacked against Kang, and yet… he always gets back up, with a new plot, a new scheme… and a new hope, that this time, it will be different.

LANZING: The structure of Kang The Conqueror is the kind you couldn’t use with any other character. Every issue lets the whole team unleash on iconic moments from Marvel history and unseen corners you won’t expect. We’re not re-telling Kang’s story or summarizing the details of a long and complicated history. We’re telling an iconic villain’s saga from his perspective for the very first time - and really interrogating the young man at the center.

How does artist Carlos Magno capture the flavor and flair of this killer new Kang series?

LANZING: Oh, man. Readers are completely unprepared for what Carlos is bringing to the table on KANG. He’s a master of setting, detail, and emotion who puts a truly astonishing amount of work into every page - and we needed that kind of partner on this series! Kang The Conqueror tells a life story that stretches from the Cretaceous to Egypt’s Old Kingdom to the 40th Century and beyond - and Carlos never stops finding ways to surprise and delight. Every setting feels unique and vibrant and lived-in, every character feels deeply alive, and his mastery of Kang’s emotional state from page to page is astonishing.

He’s also not afraid to show the ugly, tragic, and unhinged side of Kang. There are pages of this book that recalled trauma and emotionally-fraught bits of my life that were rendered so fearlessly by Carlos that they gave me nightmares. That might be a strange way to praise an artist, but in a decade of writing comics, it’s truthfully never happened to me before. If nothing else, Carlos will make you look at Kang the Conqueror like never before.

KELLY: Carlos makes this book possible, full stop. And it’s not because of his jaw-dropping splash pages, or his amazing reimaginations of classic Marvel moments. It’s not because of how effortlessly he creates iconic new looks, or handles the incredibly abstract visual challenges of time travel and multiversal causality.

It’s because he can do ALL OF THAT...  and also break your heart. The humanity he brings to Nathaniel’s life - and the tragedy that he brings to Kang’s - is the exact push and pull that makes this book one of the highlights of our career. He is the only partner we could imagine working with, and when Kang The Conqueror #1 drops, readers will understand exactly why.

Now enter the timestream and check out our exclusive look at Marvel's Kang The Conqueror #1 (Aug. 18) in the full gallery below.

First Look: How Kang the Conqueror ditches 'tyrant Pokemon' vibe to find the 'iconic villain' underneath in new Marvel series