When Mike Wheeler and his friends needed a name for the toothy, incredibly dangerous monster that was attacking the citizens of Hawkins, Indiana, in the first season of Stranger Things, there was only one option: The Demogorgon, which they lifted from one of Dungeons & Dragons' most dangerous foes. The self-proclaimed Prince of Demons was an iconic D&D monster well before he became a character in Netflix's hit show. However, D&D's Demogorgon didn't always have much going for it in the way of characterization.

Demogorgon (the D&D monster is a singular entity, so there's no need for a "the,") first appeared in 1976, in a supplemental rulebook for the original edition of the iconic roleplaying game. Creators Gary Gygax and Brian Blume borrowed the name, which is believed to derive from a mistranslation of an old Greek manuscript, from a demon who sporadically appeared in Christian literature, including John Milton's Paradise Lost. The appearance, though, is wholly original, as D&D's Demogorgon sports two grotesque baboon heads, tentacles for arms, and a vile reptilian hide. 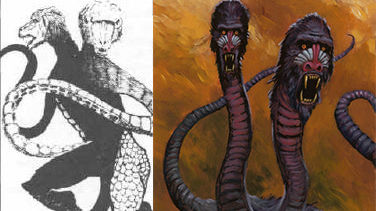 "I had been told that in while some D&D demons have real-world names, there was an attempt to make them not resemble the mythology, so as to make it not look like there was anything occult-related going on," Mike Mearls, D&D's franchise creative director, tells SYFY WIRE, admitting that the story may be apocryphal. Regardless, Demogorgon's entries in early Monster Manuals made sure to describe his horrific form, and "five paragraphs" detailing its numerous abilities in combat.

"It essentially comes across as a super-powerful monster," Mearls says. "He's the monster at the bottom of the dungeon. If you make it down to the very lowest level, there's a Demogorgon, you fight him, and you get treasure type X. So, awesome, you beat him, you're going to get a giant horde of treasure. It really isn't much in terms of personality or who Demogorgon is."

Over the ensuing years, that changed.

"What I find really interesting about how he's evolved over time, Mearls adds. "Demogorgon started out as a super powerful creature that you just don't want to mess with, and then evolved into this entire character."

Demogorgon wasn't an especially deep character in Advanced D&D, and he was hardly in 2nd Edition, but by 3rd Edition, a better sense of who he was started to emerge. Some material published in the official D&D magazine, Dragon, revealed some of his demonic history and his place within the hierarchy of Demons (he's the Prince of Demons because no other demon is strong enough to claim otherwise). In 2002, he was the antagonist for an Adventure Module, Bastion of Lost Souls. 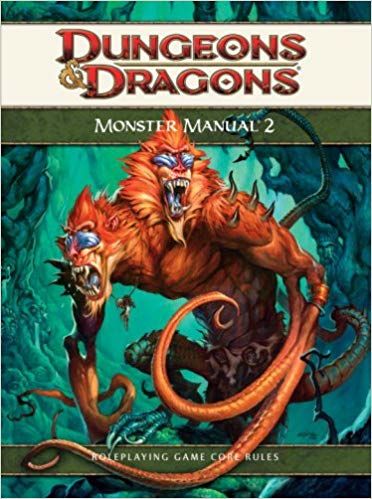 Mearls, who started working at Wizards of the Coast in 2005 and served as the main designers of D&D's 4th Edition, explains that they further fleshed-out who Demogoron was, while making a couple of tweaks.

"We presented him more as the head of a cult. There would be these people who would worship him and do his bidding," Mearls explains, adding that his look changed too. By 5th edition, Demogorgon is "drawn like a kaiju, almost. Just this enormous monster that could bash an entire city on his own."

The current Demogorgon, the one in 5th Edition, is distinct even from other Demon Lords within the game's lore, all of which are pretty unique themselves. Demogorgon is so powerful and inspires so much madness that he doesn't really need to bother with the "deal" aspect of "making a deal with the devil."

"Demogorgon just reaches out into the cultists' mind and changes them to be like him," Mearls says. "Even his symbol, if you look at it for too long, it can infect you. That was a way to make him different from other Demon Lords, is he just compels obedience."

Despite Demogorgon's expanding characterization and fame within the D&D community, the Prince of Demons did not appear in the initial 5th Edition Monster Manual. It wasn't a snub, though. Mearls says there just wasn't space in the Monster Manual to put in all the Demon Lords, and they figured it was better to save all of them for a later supplemental book rather than just picking a couple.

Demogorgon made his proper debut in 5th edition in 2018, when Wizards released Mordenkainen's Tome of Foes, a supplemental book that added most of the Demons and Devils to the game. That was almost two years after the first season of Stranger Things, which no doubt elevated the Demogorgon name to higher-than-ever levels of awareness, debuted on Netflix. Mearls says Demogorgon's newfound fame was appreciated, but a coincidence.

"I think the series came out just as we were starting to work on Tome of Foes," he says. "It was more happenstance, really. The Demogorgon was always a popular foe for D&D players."

But, while Stranger Things' popularity might not have influenced how Demogorgon appeared when he arrived in 5th edition, the show has certainly made an impact on D&D. In May, Wizards released a Stranger Things Dungeons & Dragons starter set, an entry-level D&D adventure with ties to the show. Players do indeed fight a Demogorgon in the adventure, but it's the Upside-Down version, not the classic D&D foe.

"We thought about, you know, for a starter set, it would be kind of fun to have a CR 20+ Demogorgon show up," Mearls says with a laugh, noting that the Demogorgon's "Challenge Rating" makes it way too dangerous a monster for first-time players to hope to be able to defeat. "We don't want to turn people off D&D by having their first experience being eaten by the Prince of Demons."

Did you catch that ‘Stargate’ Easter egg in ‘Quantum Leap’?