The marvelous butts of Marvel comics

Spandex became a popular material in the '80s, some 25 years after it was invented in 1958 by a chemist, Joseph Shivers. But it wasn't just Jazzercise enthusiasts who were willing participants in the spandex revolution; fictional superheroes have truly gotten maximum usage out of the stretchy material.

Often in comics, the male gaze has benefited from artists doing the most when drawing female superheroes in their skintight suits. However, in this edition of Thirstday, we're channeling our inner Tina Belcher. We're focusing on the instances in which artists have been equal-opportunity about illustrating Marvel's male superheroes' butts so that they stretch the limits of their suits, civilian clothes — and even, on occasion, metallic bottoms.

I apologize for the following reference. It's just too obvious not to make. This issue was penciled by Andy Kubert, inked by Dan Panosina, and colored by Joe Rosas. Through their collective efforts, Hank McCoy's butt turns into the Cookie Monster, but instead of cookies, it's his X-Men Speedos. The angle showcases Beast's furry blue behind in all its spandex-stretching glory.

Venom in The Amazing Spider-Man #333

There is never not a time when artists don't draw Venom caked up like a Food Network dessert show. I chose this moment from the Amazing Spider-Man series because artist Erik Larsen laid some phenomenal pencils for Mike Machlan to ink and Bob Sharen to color, all resulting in some phenomenal symbiote cheeks. Venom is not only trying to kill Spider-Man, but he is also showing Peter Parker the type of ass he gave up by rejecting the Venom symbiote — a symbiote, I might add, that beats a spandex suit any day of the week.

Peter Parker in The Amazing Spider-Man #318

Like his frenemy, Venom, Peter Parker's buns have been prominent on display no matter what suit he's wearing. In The Amazing Spider-Man #318, artist Todd McFarlane and colorists Bob Gregory and Sharen Wright showcased that with great ass comes great jeans. Peter Parker is pushing the limits of the white Jordache jeans he's wearing. From now on, whenever I quietly sing the T-Pain hook to Flo Rida's "Low," Peter Parker's soaring webbed cakes will cross my mind. He needs some boots with the fur, and who cares about the jean brand because he already owns the apple bottom.

There must be at least a few reasons why Sue Storm can never stay mad at her husband Reed Richards for too long. Now, of course, we're all automatically thinking about the fact that the guy can stretch his entire body in ways that should be illegal in most galaxies... no? Just me?

Anyway, while that's probably one of the reasons, the other has to do with the two hams he's been smuggling in his suit. The cover of Fantastic Four #392 reveals that the character Dark Raider was Reed Richards all along, but the Reed from the world in which the Fantastic Four failed to save it from Galactus. Assuming almost all versions of Reed Richards are remarkably similar, then the scientific fact that big butts belong to brilliant individuals stays true. Not even the villainous cardigan can hide the truth. Cover artist Paul Ryan made sure to give the other member from the Fantastic Four on this list a run for their money. 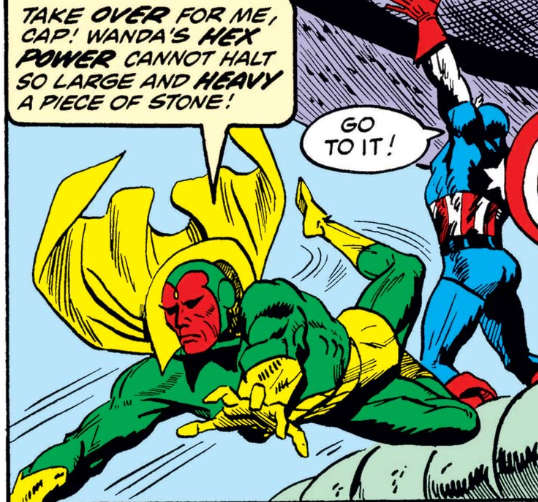 Avengers #113 picks up right after a monster named Gog went to town on the Statue of Liberty. Surprisingly the Avengers were doing their part to help clean up the mess. Long before the general public knew about Captain America's ass, artists have been making Cap's backside thicker than Snicker. The artists working on Avengers #113: Bob Brown on pencils, Frank Bolle on the inks, and David's colors all helped to do their part in making Cap's cakes super-soldier serum thick. In the panel, it's apparent Cap's strength comes from his gluteus maximus because there he is, holding up the crown to the Statue of Liberty while Wanda's sentient Hitachi comes to her aid. I know Captain America's shield is made out of vibranium. Still, he should possibly consider getting a suit that is made out of it too, because his ass is pushing the limits on standard spandex.

Hulk in The Amazing Spider-Man #328

You may not like Bruce Banner when he gets mad, but you might like the ass that comes with it once he turns into the Hulk. Once again, Todd McFarlane and Bob Sharen brought their artistic talents together to give us yet another bubble butt in the Amazing Spider-Man series.

In this issue, Sebastian Shaw hires Hulk to take out Spider-Man. Shaw is exceptionally petty, so the reasons don't need to be explained in detail, plus whatever they are pale in comparison to Hulk's massive ass. It's a gamma rays-fed backside that could probably Hulk smash all by itself. Honestly, Hulk's entire physical profile in this issue makes me believe he could make a mean pot of greens and cornbread. An ass like that just screams well-seasoned home-cooked Southern food.

Wyatt Wingfoot is such an underrated character who I love seeing anytime he pops up, but it was particularly great when he was a constant presence in both She-Hulk's series and throughout the Fantastic Four comics. In The Sensational She-Hulk graphic novel, Wyatt and Jennifer's date night is interrupted when S.H.I.E.L.D. abducts them. They let sentient cockroaches infiltrate their ranks. It's that kind of incompetence that should result in their defunding. Anyway, back to Wyatt Wingfoot, because that's why we're here. She-Hulk returns to her human form to slip out of the holding cell she and Wyatt are confined to so she can break them out.

This is where artist John Byrne, inker Kim DeMulder, and colorist Petra Scotese give us the juiciest ass on this list. In true She-Hulk fashion, she grabs a handful of Wyatt's butt before going off to take care of their detainers. Wyatt is not only one of the best boyfriends in comics, but he owns one of the most succulent butts, too.

This list would mean absolutely nothing without my favorite blue demon, Nightcrawler. I have an appreciation for the early '90s X-Men Unlimited issues purely because of the aesthetics alone. Issue #4 of the series opens with Mystique's six-inch heel deep in General Amond Gaudier's chest as he stares down the barrel of her gun. The rest of the issue is about two of Mystique's kids, Rogue and Nightcrawler, trying to track her down.

This issue did two things — confirmation that Nightcrawler is Mystique's biological son, and that he got those cheeks from her too. A panel in this issue showcases Nightcrawler's blue bubble butt, and it's stayed with me for years. Like his teammate featured on this list, Nightcrawler has a little bit of a Cookie Monster situation going on with his suit, but it's even more prominent because he wears a red onesie. There is a team of artists on this issue, and they truly turned it out. Bless inkers Sal Regla and Sandu Florea, and colorists Joe Rosas and Marie Javins.

The Thing in Fantastic Four #374

The entire Fantastic Four is going through some things leading up to issue #374 and coming out the other end. Sue and Johnny set fire to a local university, causing millions of dollars in damage. Sue and Reed are arguing throughout the entire issue, and baby Frankin's powers put Agatha Harkness through it. Spider-Man, Hulk in a brown jumper, Ghost Rider, and Wolverine show up to bring Johnny in for the damage he caused to make matters worse. Since the Fantastic Four are ride-or-die for one another, of course, they protect Johnny.

Amongst the chaos are the two boulders stuffed in Thing's suit. I know he has a rock-hard ass, but there is just no reason it should be as prominent as it is. Pencilers Tom Defalco and Paul Ryan, inker Danny Bulanadi, and Colorist Gina Going came together to make us wonder if Thing's ass feels like it's been smoothed out by a pumice stone.

I don't even know how to begin to summarize this issue of Avengers because there is so much going on, including Vision's behind, so let's just focus on that. While he tries to calm down, Mephisitoid picks him up by the neck. A distressing situation, but unfortunately, the only thing that I could pay attention to is how ridiculously fat Vision's ass is in this panel.

I'm not sure exactly why a synthetic would need to have so much booty. Is he storing data back there? Back up batteries? Attachments? Who knows, but that's what it is thanks to pencilers Tom Palmer and Rich Rankin, inkers Bollersi Kaliszi and Marshalli Marts, and colorist Janice Chiang.