The strange loves of Storm

It’s no secret that Ororo Munroe is a FANGRRLS favorite. This is a woman that has been around the world and even a pretty fair amount of the galaxy yet she remains perhaps the most emotionally grounded X-Man. She’s an omega level mutant and finds herself regularly seated at tables of Marvel’s most powerful players. She has done everything from pickpocket to queen. She is kind of the best.

However, our friend is not always lucky in love. Although she has been romantically involved with Wolverine, married Black Panther, and almost got married once before to another X-Men teammate named Forge, Storm ends up back on Tinder more than she deserves to. Truly, people do fear an independent woman. Out of all of Storm’s relationships, these are some of the greats.

Sorry, are you not familiar with Yukio, the love of Storm’s life? Well, that never totally makes it into the comic books, but it’s implied, okay? Not only is there all the average subtext of pretty much all female friendships as written by Chris Claremont, but more importantly, spending time with Yukio is why Storm initially went punk, donning the now classic black leather vest and mohawk combo that remains one of her most iconic looks many years later.

The biggest problem with Yukio as a partner is that she’s non-stop the wildest, most provocative person, she never tells the truth under any circumstances, and many different people are trying to kill her at any given time. For Storm, none of those personality traits are complete dealbreakers. She’s still super into Yukio and yearns for a life where she isn’t bound by responsibility to be in full control of her powers every moment of the day, in which she could have continued as a thief and led what she dreams would be a completely free life.

Oh, but Storm, it wouldn’t be a completely free life, and our girl discovers that when Yukio’s dark side inevitably catches up with them time and time again. Acknowledging Yukio as a true soulmate but knowing that she will only ever led her astray, Storm always returns to the X-Men in the end. Although they’ve never been able to make it work, Yukio is never completely out of Storm’s life, and they occasionally reunite to do things like hang out in hot tubs and flirt with each other.

Forge is probably best known for being Storm’s love interest for a solid chunk of the ‘80s and ‘90s X-Men comics. A Native veteran with the mutant ability to create or master complex machinery, Forge is a pretty rad guy and an inventor with an interest towards helping people due to his survivor’s guilt over losing much of his squadron at war.

Storm and Forge had a pretty bumpy start to their relationship, considering that he accidentally hit her with a ray that briefly depowered her and she more or less threatened to kill him for it. But they also found each other in one of the most romantic X-Men stories of all time, Life/Death, in which they hung out in a tower and made out a lot.

Like so many comic book love affairs, though, this was not meant to last. Storm is the most powerful of women, and even a cool guy like Forge let his insecurities get the better of him as he proposed marriage then revoked the proposal and left the team entirely when she didn’t immediately say “yes.” It was pretty rude. Then he dated Mystique. 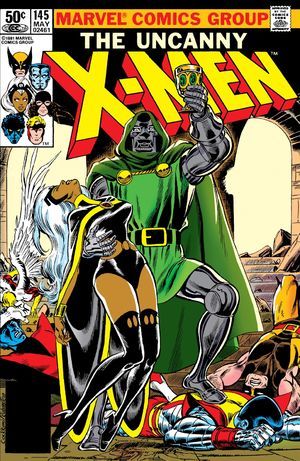 You know, Storm has serious power over the wrong kind of man. Not only was she the chosen one of Dracula for a hot minute, not to mention Wolverine (which is fine because Logan was a gentleman and a friend to Storm, but also his hands are made of knives and pretty much everyone he dates either dies or returns later to kill him.) I didn’t write the books nor am I casting judgement; these are just facts. Forge is the most chill guy ever and even Forge acted like a total fool with Ororo (see above).

If all that wasn’t bad enough, she’s got Doctor Doom crushing out on her like a schoolboy while also lowkey making it clear that he has no problem with killing her if she gets on his nerves. Isn’t it always the way? Well, Doom is a monster, but Storm is not down for that kind of love. She does consider it for a minute, though. I mean, he has his own country, which turns out to be a huge selling point for Storm a little ways down the road when she becomes, you know, QUEEN OF WAKANDA.

Anyway, Doom and the unbelievably ridiculous X-Men villain Arcade take some of the X-Men’s friends captive just to get them to go to Arcade’s evil amusement park, A.K.A. Murderworld, perhaps the best name for anything, ever. Storm is ready to throw down with Doctor Doom, but he turns the encounter into a dinner invitation. Doom, you sly old dog! Unfortunately, despite his fondness for Storm, it doesn’t change the fact that he’s extremely bad and so he still pretty much tries to kill her. In turn, she pretty much tries to kill him, then they just agree to go their separate ways and maybe meet up later. Probably for the best.

It needs to be said: The Ultimate Universe was an ungodly mess. It did give us Miles Morales and therefore we must love it, but it also gave us some pretty messed up stuff like incestuous Quicksilver and Scarlet Witch, incel Reed Richards, way too much domestic abuse between the Pyms, and Wolverine with a soul patch. Yikes, yikes, yikes, and yikes. Also, Storm dated Beast.

Storm and Beast had a thing for a little while in the Ultimate Universe, but it was broken off when he, you know, died. Storm responded by getting an amazing haircut and a more punk-inspired outfit, then later by dating Wolverine, which got kind of awkward when Beast came back from the dead. That awkwardness cleared right up when Storm just straight up left Wolverine and started dating Beast again.

There are so many bummers in the Ultimate X-Men comics and I don’t want to focus too heavily on just one, but the fact that Storm’s punk makeover in that universe was triggered by Beast’s death and not her own commitment to self-empowerment and independence is not a great alternative to regular continuity’s hyper-autonomous Storm. I was simultaneously too old and too young for Ultimate X-Men but I’m a sucker for boring but cute ships, so I do believe Beast and Storm deserved better.

Storm and Quicksilver’s very brief relationship took place in an alternate reality - or, really, the alternate reality to end all alternate realities, X-Men’s Age of Apocalypse. Taking place in 1995, it tells the tale of a dystopian present in which Xavier had died early on and left Magneto as the one to lead the X-Men. Reality, as a result, turns into an absolute mess. The eugenics-spouting villain Apocalypse walks all over the X-Men and goes ahead and takes over the world. Thanks for nothing, Magneto. The story arc tried to fit pretty much every X-Men character into eight different four issue mini-series and a handful of specials, and it is truly bananas. Everyone has shoulder pads and tons of eyeliner and they all look like really cool goth rockers. Storm is no different — her costume in Amazing X-Men is incredible.

This take shows us a Quicksilver that is a lot more somber and mature than his regular continuity self. This Quicksilver lost his sister early on and spent a great deal of time helping his father, Magneto, who has a much more active role in his life. Most of his and Storm’s relationship is told through thought bubbles as they both struggle with expressing their feelings for one another. It’s pretty dang cute even though there is literal mass genocide going on this whole time.

Age of Apocalypse was truly the alternate reality that was born to lose, so this cuteness was not to last. Storm and Quicksilver didn’t seem to get the chance to be real with each other about their feelings, but they did apparently perish in the battle to restore peace to the world, so there’s that. In regular continuity, Storm and Quicksilver pretty much never interact and he’s neck deep in Inhumans drama. Storm doesn’t really need that on her plate. Get your life together, Pietro.

Storm's most important relationship was with Yukio

Storm vs. Callisto, and the uneasy alliance of heroes and villains