Ah, Riverdale Beach. Year after year, the one constant for the summer vacations of our beloved group of wayward teens known as "Archie's weird friends." Eating ice cream, playing volleyball, and engaging in weird sexual innuendo puns on the covers of many comic books over decades, Riverdale Beach is a place for everyone (mostly just Archie and his friends, though).

Yet, Riverdale Beach is... a pretty strange place. As in, it might be part of the Bermuda Triangle. We don't have a map handy, but we do have stacks and stacks of Archie comics, and there is definitely something weird going on over there. For some of the very strangest activity, there can be no explanation, but we have a few ideas about what might be happening at Riverdale Beach.

Is Hiram Lodge money laundering and writing off taxes through Veronica’s friends?

The Lodges are one of the wealthiest families in Riverdale. Hiram Lodge seems like a reputable, successful businessman on the outside, but maybe there’s a little more going on behind the scenes. Riverdale is a small town, which means Hiram Lodge has to get a little more creative with his alleged money laundering. This is where Riverdale Beach comes into play. It’s the perfect place for Hiram to clean his money by putting Veronica’s friends on his payroll. It’s a win-win for everyone involved because Hiram gets a boost in sales on things like new surfing products and gets to offload some of that extra cash by paying someone like Betty well above minimum wage to help sell that product. It’s one of the few times the wealthy elite of Riverdale actually distributes their wealth instead of tormenting everyone with it. There is also that time Hiram “let” Veronica and her friends fix up some private beachfront property for him, which probably was later sold at a profit. Hiram said he didn’t want to put any more money into the property, and he definitely got away with some free labor. Hiram is so wealthy that sometimes the actual beach isn’t needed to help offload cash. When Veronica and Betty were looking for someone to sponsor their beach volleyball team, Hiram did what was best for his bottom line and brought the beach to one of his many shopping malls. A move that merged all of the Riverdale teens', especially Veronica's, favorite things to do. - Stephanie

Of all the Riverdalians, Reggie is known far and wide for being the most annoying. His many crushes and his jealousy of Archie has motivated a lifelong feud with our bumbling hero, which reminds us a lot of a certain two gods in Norse myth that butted heads over many things, mostly their own egos. Reggie is way too set on getting a one-up on Archie in ways that defy logic, leaving us to believe he either has a massive crush on Archie or he’s the Norse god Loki, come to earth to wreak the folly of his obsessions on an unsuspecting human populace. Or… both.

For instance! In Ups & Dunes, Reggie is the only person in Riverdale to ever own a dune buggy, and he squeals out throwing sand in everyone’s faces only to ultimately end up in a sinkhole. In Reg the Barbarian, Reggie is apparently the only person in the gang who has ever heard of a Renaissance Faire and he desperately tries to get passersby to pay him to joust them. Nobody goes for it so he tries to get Archie to take him up on the game, and Archie is appalled. Reggie’s life is basically like someone read in a book what things are and then just tried to do them without actually seeing them in practice. Kind of as if… they were not of this world… and had been sent here as a punishment by Odin the Allfather. - Sara

Where is all the sunscreen?

As much time as the residents spend on Riverdale Beach, there seems to be an ongoing sunscreen shortage. There have been quite a few times when someone from Archie’s crew has been on a desperate hunt for sunscreen. Part of the problem? It seems as though sunscreen is often used as an icebreaker or just outright for foreplay—the latter mainly thanks to Betty, Veronica, Archie, and Reggie. There have been several times in which Betty or Veronica have had “trouble” locating some sunscreen, often turning down sunscreen offers from others so that they could borrow some from Archie and, of course, have him apply it to their skin. The unsteady flow of sunscreen could be another Lodge Enterprise creation, a conspiracy theory I’m sure Jughead could get behind. - Stephanie

Why are The Archies the only band anyone knows or likes?

One of the wildest things about Archie comics of old is that Cheryl Blossom actively terrorized everyone in Riverdale for reasons that didn’t make that much sense and always ended in her own comeuppance. We guess that’s not so different than how Cheryl is now, but at least she had a character arc to help her get there. In the Archie’s Summer Splash Free Comic Book Day special, that is taken to the next level as Cheryl tries to get in on the summer concert Zowie-Palooza with her act, BLOSSOM, which is not great. But Cheryl has no interest in being great and mostly just wants to be spiteful, so it does not bother her in the slightest.

Yet, it’s odd that the Archies are the only band in Riverdale anyone listens to or likes. They are the chosen local act for Zowie-palooza, and when Cheryl tries to get BLOSSOM together, the gang forms a circle around their beloved Archies to protect them at all costs. There have to be other musical groups in Riverdale, right? Like, people in Riverdale have heard other songs besides “Sugar, Sugar” over the last fifty years, haven’t they? … haven’t they? - Sara 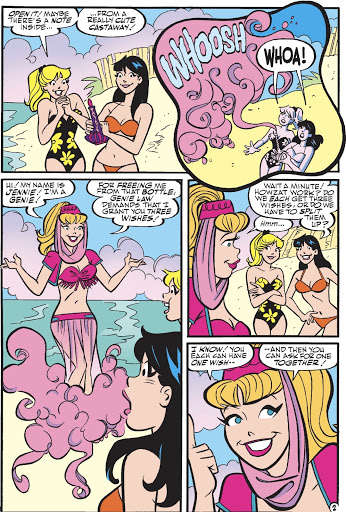 Does the beach function as a sort of Bermuda Triangle?

It feels like (in what is probably a deliberate artistic choice) Riverdale is located literally anywhere in the United States. Are they in the Midwest or somewhere along the east coast or west coast? No one knows for sure, but one thing is for certain, wherever Riverdale is located, the residents are having fun, especially on Riverdale Beach. They clearly have all four seasons wherever Riverdale is located, and summer is one of them. There is never a time when a surfing competition is not happening, and that’s because the waves at Riverdale Beach are perfect. According to Archie comics, Betty is one of the best surfers in the world like she grew up somewhere along the Pacific Ocean. Like... Betty has enough trophies to melt down and sell the metal to pay her way through college. Then in addition to the surfing contests, there have been several movie crews who have visited the beach to film. With how often the overall appearance of the beach goes from looking like it's located on the east coast or somewhere in the upper west coast area, it makes sense Riverdale Beach would be such a hot location for big or small screen productions. Lastly, randomly finding floating bottles containing genies very much feels like something that would happen on a beach that's located in a town that exists everywhere all at once. - Stephanie

Where are the grown-ups?

In the show Riverdale, the parents are all over the place. Half of the scenes are just the parents, saying many things, having a lot of fun, being hyper present in their children’s lives. If you throw a dart on the Riverdale TV show, you’ll hit someone’s parent. In Archie beach comics anthologies, the adults are pretty much nowhere to be seen. Honestly, I feel like they all need more parental guidance in general, but, specifically at the beach, where they get into all kinds of wild stuff (see above).

The few times adults go to Riverdale Beach, they almost don't live to tell the tale. Take Principal Weatherbee, who attempts to calmly relax at the beach in Crowd of One. Archie very plainly tells Weatherbee that kids monopolize the beach, but when Weatherbee decides to stay, it leads to him getting a beach ball to the face, drenched in sunscreen, hit with an ice cream cone, and terrorized by a local band’s practice. He leaves while he still can, but he should have come back with some back-up because those teens are definitely up to something (see above). - Sara 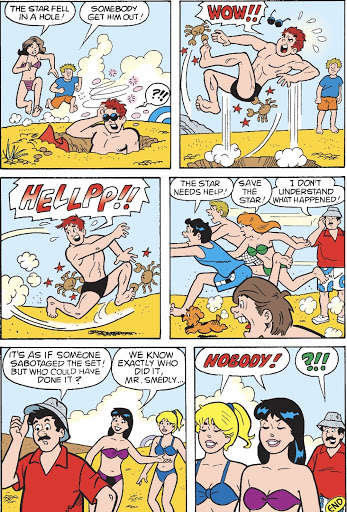 Is Riverdale Beach the best place to get revenge?

If someone’s done you wrong, Riverdale Beach is the best place to seek your revenge. Do you feel like taunting the poor of Riverdale for having the audacity to be in the same space as you are all carefree even though they’re without money? Maybe you need to get revenge on a Riverdale elite who thought it would be okay to cut you in the ice cream line. There are also opportunities to get revenge on asshole celebrities, too. Betty and Veronica almost sent an actor to the hospital with third-degree burns and broken legs after he called them nobodies. Riverdale Beach can be a dangerous place. It’s a wonder no corpses have washed up on shore from all those perfect waves. - Stephanie

It's a fan thing
Join SYFY Insider to get access to exclusive videos and interviews, breaking news, sweepstakes, and more!
Sign Up for Free
All Posts About
Comics
Fangrrls
Archie Comics
lists
Related Stories

NYCC: Archie Comics brings back Sabrina with new stories set in both the comics and TV worlds

Chilling Adventures of Sabrina to continue Netflix saga in comic form, 'Archie' multiverse on the way