Whatever happened to Donkey Kong Jr.?

Across the various Donkey Kong games, there are a lot of Kongs. It's less a species name and more a clan name. Most folks know Donkey, Diddy, and Dixie, but there's also the likes of Funky, Swanky, and Tiny. There's even Lanky Kong, an orangutan who appears to have defected from the ranks of the Manky Kong enemies of the original Donkey Kong Country. (I dunno, I still find him suspicious.) But there's one Kong who's completely fallen off the radar: Donkey Kong Jr., Donkey Kong's son.

Donkey Kong Jr. was once such a large part of the Nintendo universe that he had his own arcade game. Nowadays, it's like he never even existed. So I'm practically forced to wonder: whatever happened to Donkey Kong Jr.?

Before answering that, it might be best to clarify who Donkey Kong Jr. is. He made his first appearance in, naturally, Donkey Kong Jr., the 1982 sequel to the original smash-hit arcade game Donkey Kong. Whereas in the original game, Mario (or Jumpman) was trying to save his girlfriend Pauline from the clutches of Donkey, this game featured Donkey Kong's son trying to save dear old dad from Mario's very own clutches. Yep, Mario's a full-on villain in this one. Who needs Wario when Mario's got a whip? 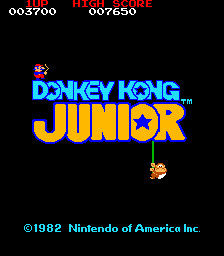 He then appeared in Donkey Kong Jr. Math the following year, where Donkey Kong teaches Junior math by holding up signs with numbers on them and making Junior pick up the numbers and signs necessary to get that number. It's that kind of thrilling gameplay that made Donkey Kong Jr. Math one of the worst-selling games on the Nintendo Entertainment System, killing a nascent line of edutainment games in the process. Uh, whoops.

Donkey Kong Jr. spent the rest of the '80s making cameo appearances in other games; for instance, he can be spotted in the audience in Punch-Out!!. You could also find him in Nintendo's various other attempts at marketing, like the Nintendo cereal and the Saturday Supercade, a cartoon series about the adventures of circus owner Mario and his animal trainer Pauline. With Donkey Kong kidnapped by Mario, Donkey Kong Jr. teamed up with a greaser to go rescue his pops.

But the '90s offered Donkey Kong Jr. a new lease on life by giving him a driver's license, as he's one of the original playable characters in 1992's Super Mario Kart. He went on to play a major role in Donkey Kong for Game Boy, aka Donkey Kong '94. Don't let the name fool you; this is much more than just a handheld port of the original arcade game. After four levels mimicking the original, it becomes its own adventure. It also marks the moment when plumbers and Kongs first forged their lasting peace. After beating the game, Pauline, Mario, Donkey Kong, and Donkey Kong Jr. all take a picture together.

Even after Donkey Kong Country came along in 1994, turning the original Donkey Kong into Cranky Kong and giving a brand-new Donkey Kong an all-new supporting cast, Donkey Kong Jr. still made appearances. He was an original cast member in the first two installments of the Mario Tennis series: the 1995 Virtual Boy game Mario's Tennis and the much more fondly remembered Nintendo 64 follow-up in 2000. But his first 3D appearance would prove to be his last.

In the 21st century, Donkey Kong Jr. has only made small, slightly ominous cameos, outside of Donkey Kong Jr. appearing as a minigame in the fourth installment of the Game & Watch Gallery series for the Game Boy Advance. He's been a trophy, sticker, and spirit in the Smash Bros. franchise. He did return to Mario Kart... as someone in the audience at Waluigi Stadium in Mario Kart: Double Dash!! (perhaps forlornly trying to reconnect with his son/dad?). His only appearance in the modern Donkey Kong Country series has been in a Wii U pad held aloft by a statue of the original Donkey Kong in Donkey Kong Country: Tropical Freeze's Aquaduct Assault level.

But since 2014, it's been six years of radio silence. Which raises the natural question: what happened to Donkey Kong Jr.?

Well, in our world, Donkey Kong Country happened in 1994. During the development of the game, Rare wanted the dynamic duo at the center of the game to be Donkey Kong and Donkey Kong Jr. But when their design for Kong the Younger began differing drastically from Nintendo's, Nintendo asked them to either go back to the original design or create their own character. Rare elected to go the latter route, and that's the story of how Diddy Kong, the lone spider monkey in a community of apes, was born. Nintendo just never elected to update Donkey Kong Jr., and we've all just learned to live without.

But in the actual narrative of the games? Whether Donkey Kong was meant to be a grown-up Donkey Kong Jr. was a question for quite some time. But as of Super Smash Bros. Brawl and Donkey Kong Country Returns, it's been confirmed that Cranky Kong is Donkey Kong's grandfather, making DK officially Donkey Kong the Third. But what that means for Donkey Kong Jr., besides that he eventually grew up and had Donkey Kong with an unnamed lady Kong, has gone unaddressed by Nintendo and Retro Studios.

In my opinion, this is primo story fodder, even for a franchise whose narratives usually amount to "someone destroyed our good vibes? Well, we're gonna destroy THEM!" Should Nintendo and company ever decide to do something with Donkey Kong's estranged father, I have some ideas.

A classic fish-out-of-water story! Donkey Kong and Donkey Kong '94 are all set in an urban locale. While the Kongs originate from Kong Island and Cranky was eager to return after being captured by Mario, maybe Donkey Kong Jr. didn't. Maybe he stayed behind in the city, sending his son to his father to be raised on Kong Island so he could focus on his career. If Donkey Kong Jr. is an ape of an office worker, then having Donkey Kong visit him in order to really get to know his dad offers plenty of puzzles as the laidback, carefree ape has to come face to face with office culture and his more buttoned-up father. "Clare," I hear you say, "this sounds like a lot like Jungle 2 Jungle but not racist." That is 100% correct.

A healing road trip! This is obviously related to the above, but it would provide more traditional Donkey Kong Country gameplay than trapping the Kongs in the city. An apologetic Donkey Kong Jr. returns to Kong Island to try to make up for years of missed milestones. Donkey Kong immediately rejects his overtures, but another Kremling invasion forces father and son to team up and travel all across Kong Island to save the day and, maybe, their family connection. It's a heartwarming classic!