If dark fantasy, particularly dark fantasy that takes you back to Victorian England, is your thing, then you've likely been keeping an eye on Amazon's new series Carnival Row. After all, when its development began, this project had none other than dark fantasy luminary Guillermo del Toro onboard. Del Toro has since stepped back from the project, but Carnival Row kept pressing forward, and now we're finally getting a look at what's in store from the series.

Amazon Studios has dropped a brief but tantalizing official teaser for the show — set in a Victorian-era world in which fantasy creatures like fairies are refugees from their homelands thanks to human conquest — featuring stars Orlando Bloom and Cara Delevingne warning us of "a rift" in the city with time "running out."

Bloom and Delevingne star as Rycroft "Philo" Philostrate, a human detective, and Vignette Stonemoss, a refugee fairy, respectively. Though the world doesn't tolerate such relationships, Philo and Vignette have rekindled their romance in a city on the brink. According to Amazon's official description, "Vignette harbors a secret that endangers Philo’s world during his most important case yet: a string of gruesome murders threatening the uneasy peace of the Row."

In addition to having some of the most whimsical character names ever, Carnival Row also features a stacked cast. Joining Bloom and Delevingne in the series are David Gyasi (Interstellar), Karla Crome (Under the Dome), Indira Varma (Game of Thrones), and Tamzin Merchant (Salem). Amazon also dropped a poster for the series Monday, which you can check out below. 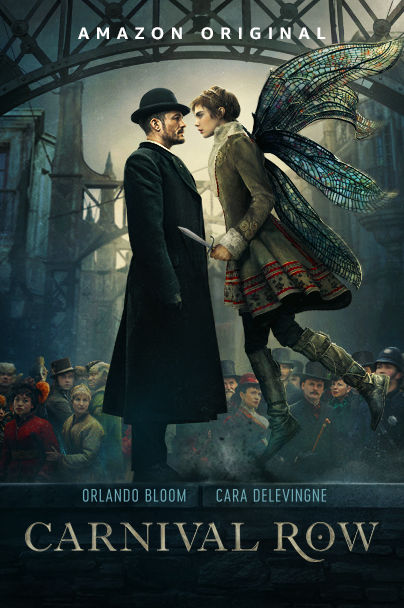 'Puss in Boots: The Last Wish' hailed as one of DreamWorks' best