As a best-selling author of medical thrillers who has an actual medical degree, Robin Cook is always keeping an ear to the ground, listening for the silent rampage of the next virulent pathogen. With the coronavirus pandemic currently holding the world hostage, Doctor Cook (author of acclaimed novels like 1977's Coma and 1987's Outbreak) is seeing his worst fears realized.

A New York City medical examiner, Stapelton appears in Marker (2005), Critical (2007), Intervention (2009), and, most recently, Pandemic (2018). The latter book draws its inspiration from the 1918 influenza outbreak, which claimed the lives of an estimated 50 million people around the globe.

"[Coronavirus] sounds very similar to what was experienced in 1918, in the sense that it’s spreading so quickly and so effectively," Cook says, also mentioning that both illnesses affect the respiratory system.

So, how does a physician with degrees from Wesleyan and Columbia, as well as a residency at Harvard, end up writing disease-based tales of suspense? Similar to what Max Brooks told us, Cook is of the idea that fiction is the best way to teach people on technical issues.

"That’s the way I can get out information ... To try and influence or to try and get people to understand more about medical issues and medical science and bio-technology. It was increasing so fast and yet, there was no way for the general public to know about it," he explains. "I actually think that fiction is more powerful than non-fiction in issues like this. If you write a [non-fiction] book on pandemics or pandemic preparedness, who reads it? Well, it’s read by the people who are interested in this issue. There’s quite a few people, but it’s fairly narrow, so you’re kind of preaching to the choir."

One of the reasons that Doctor Cook attended medical school in the first place was because of the novels and films that inspired him as a young man. When he finally began to train as a doctor, however, he was in for a rude awakening.

"It disturbed me when I got to medical school and it was quite different than what had been presented in the books I read or the movies that I had seen," he remembers. "I said, ‘Someday, I’m gonna write a book that’s true!’ That was the origin of why I ended up doing what I’m doing."

Following through on that personal oath, Cook eventually became known as one of the progenitors of the modern medical thriller. One of his trademarks is a refusal to heighten reality. For example, he actively sought out a course on forensic pathology for his Stapelton books.

"I really rely on fact. I expend an enormous amount of effort trying to make sure that I understand whatever the issue is that I’m writing a book about, as well as whatever speciality it might reflect," he says, citing Pandemic as an effort to "get people to understand how worrisome" an outbreak in New York City would actually be. Unfortunately, life is now imitating art, as Governor Andrew Cuomo puts all of Manhattan on lockdown in an effort to curb a further spread of the contagious malady.

As our discussion turns to the nature of the virus itself, Cook talks at length about the zoonotic origins of COVID-19, which is theorized to have started in bats, pangolins, or both. Zoonotic diseases like this particular strain of coronavirus start out in animals before making the jump to humans.

"It was a virus that probably has been there forever in these species and maybe some other species as well," Cook says, drawing parallels to previous zoonosis health scares caused by HIV and Ebola. "It turned out to be very infectious. In a lot of ways, there’s more similarity than differences."

With over a century of medical advancement since the 1918 influenza pandemic, Doctor Cook is optimistic that modern science will find a way to knock out the coronavirus in a fairly short amount of time.

"We had the genome of this virus very quickly," he says. "Way back when, when they didn’t know anything about the genomes and they were just trying to find parts and pieces of the virus and trying to develop something that would stimulate the immune system, that was like being in a dark room and blundering around. But now, we have the genome, we have sequences, we have the actual protein of the virus. The protein of its coat."

Right now, it's believed that a viable vaccine will be ready over the next year to a year-and-a-half. The biggest challenge on that front (as is the case with every new vaccine) is coming up with an inoculation that doesn't accidentally give someone the virus.

"It should be relatively fast to find a number of different potential parts of this virus that would stimulate the immune system enough to make it work as a vaccine, but not so much that you didn’t get as much result in terms of symptomatology," Cook concludes. "You don’t wanna give somebody a vaccine that’s gonna cause the symptoms as bad as if they had the illness ... It’s a lot easier than it was, we’re way ahead of the curve in terms of being able to do it, but you have to go fairly slowly."

Editor's note: Despite having written a book entitled Outbreak, Dr. Cook is not affiliated with the 1995 film of the same name starring Dustin Hoffman and Rene Russo. That same year, though, his book was adapted into a television movie called Formula for Death. 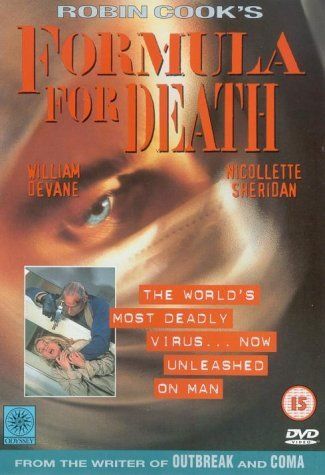 For our list of all the events, films, TV shows, and more affected by the pandemic, click here. And for extensive information on how to keep you and your loved ones safe, check out the CDC’s coronavirus website.